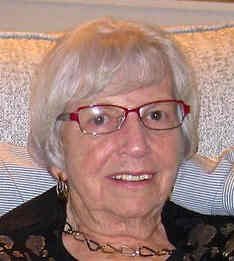 Edith Elaine (Nixon) Walrath went home to be with her Lord at age 90 on July 28, 2020, while hospitalized in Red Deer, AB, where she and her husband, Doug, had recently moved to be close to family. Elaine was born April 10, 1930 in Estevan, SK. She met her sweetheart, Wayne Douglas (Doug) Walrath at Moose Jaw (Aldersgate) Bible College. They were happily married June 27, 1950 and celebrated 70 years of marriage this past June. Together they raised four children: Brian, Jerry, Janice and Betty while residing in various Saskatchewan locations as well as Thunder Bay, ON, with Saskatoon, SK being their primary home. Doug and Elaine enjoyed many years as cabin owners at Arlington Beach, the location of their church campgrounds. They subsequently moved to neighbouring Strasbourg, SK, and then on to Winnipeg for 15 years in their retirement, and most recently Stettler and Red Deer, AB. Early in her life, Elaine worked in highly regarded secretarial positions including for the RCMP and the Board of Education in Seattle. While raising their family in Thunder Bay she went back to school to be certified as a Business Education teacher, a career which she pursued in both Thunder Bay and Saskatoon. In retirement Elaine and Doug ran the Bosch Kitchen Centre in Regina. Elaine filled the shop with the aroma of freshly baked whole wheat bread that became associated by the whole family with “Mom” and “Grandma.” Elaine had a keen mind and took on the challenges of modern technology, learning in later years how to communicate with family and friends via email, Facebook and texts on What’s Ap. Elaine was appreciated for her love of friends and family, her good sense of humour, her ability to harmonize any hymn with her mellow alto voice, and her faithful, daily commitment to following her Lord, Jesus Christ. Elaine was predeceased by her mother, Zella (Nixon) Brown, stepfather Irwin Brown, father, Ford Eldon Nixon, sister Irene Kimbriel, and grand-son, Jonathan Douglas Walrath. She will be lovingly remembered by husband, Doug; children: Brian (Betty) Walrath of Spring Arbor, MI, Jerry Walrath of Calgary, AB, Janice (Marshall) Schultz of Red Deer, Betty (Steve) Dearth of Winnipeg; grandchildren: JoAnna (Gil) McConnell of Minneapolis, MN, Andrea (Adam) French of Ann Arbor, MI, Vanessa (Tobin) Bawinkel of Chicago; Ben (Jasmin) Schultz of Stettler, AB, Pamela (Jason) Klassen of Edmonton; Matt (Anna) Dearth of Crookston, MN, Katie (Nathan) Buhler of Brandon, MB; 12 great grandchildren; brother, Keith Nixon of Chilliwack, BC; sister, Shirley Wetherald of Shelley, ID; many nieces, nephews and friends. Elaine was a passionate advocate for and encourager of the women in her life to grow to their full potential, spiritually with Christ, academically and personally. In light of this passion the family asks that in lieu of flowers, donations be made through CrossRoads Church and designated to the Central Alberta Women’s Outreach Society. Donations may be made on-line at: https://www.crossroadschurch.ca/qry/sr_donate.taf  Condolences to Elaine’s family may be emailed to meaningful@telus.net. Arrangements in care of Meaningful Memorials Funeral Service, Red Deer AB. A locally owned funeral and cremation provider serving Red Deer and all of Central Alberta    587-876-4944

Share Your Memory of
Edith
Upload Your Memory View All Memories
Be the first to upload a memory!