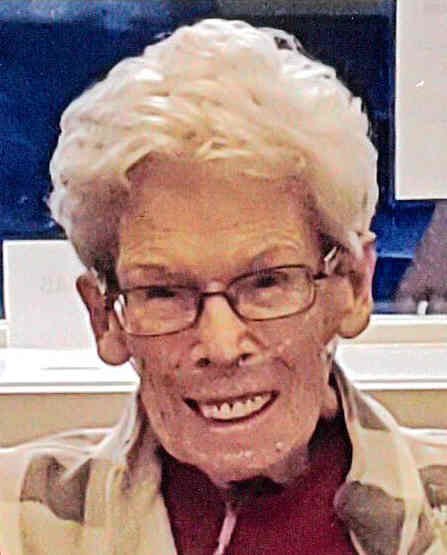 Mrs. Marjorie Iris Wojciechowski (nee Hillman) of Red Deer passed away after a long hard battle with COPD, at the Red Deer Regional Hospital Centre on August 5, 2020 at the age of 84 years. Marge was born in Coronation, Alberta in 1936 and grew up in Fleet, Alberta. She married Ambrose Wojciechowski In September of 1952 and they settled in Daysland, Alberta to raise their four children.  Marge was very active in the Order of the Royal Purple and the Hospital Auxiliary in Daysland and worked at the Daysland Hospital.  In 1977 they moved to Red Deer and she worked at various jobs settling in at the Red Deer Regional Hospital  working their until she retired. Marge’s favorite hobbies were knitting, camping with family, puzzles and find-a-words”. Marge will be lovingly remembered by one son Jim (Carol) of Red Deer; three daughters Donna (Howie) Kroetsch of Fort Vermillion, Valerie Carr (Richard Vanderwenf) of Edmonton and Barbara Terway of Edmonton; eight grand children Tanya Catt (Paul), Kristian Kroetsch, Aaron Carr, Lynette Wolokoff (Dale), Wayne Terway (Patricia Nelson), Sheri-Ann Preza, Michele Ellertson-Skinner (Morgan) and Amber Barker (Justin); ten great grandchildren Jenna, Courtney, Carter and Mason Wolokoff, Ryley Preza-Mairena, Ashten Preza, Kaiden Ellertson, Torlan and Imogen Skinner and Braydon Barker. She is also survived by two brothers Norm (Betty) of Sherwood Park, Gordon (Joanne) and sister Evelyn Bolin (John) both from Red Deer and numerous niece and nephews. Marge was predeceased by her father Rupert, mother Violet; stepfather Alec Wachter; two brothers Frank and Ken; one sister Eunice and one sister-in-law Jo.

We would like to THANK all the staff at Points West Living for the past two years, ESPECIALLY THE NURSES AND CAREGIVERS ON THE THIRD FLOOR. Also, a THANK YOU to the staff at Medigas for their care and attention to mom and her oxygen needs for the past eight years. Your compassion and treatment provided for our Mom has been greatly appreciated.

Due to the current Covid-19 social gathering restrictions, a memorial service will be held at a later date. In lieu of flowers, memorial donations may be made directly to The Lung Association of Alberta, Box 4500  Stn South, Edmonton   AB   T5E 9Z9. Condolences to Marge’s family may be emailed to meaningful@telus.net. Arrangements in care of Meaningful Memorials Funeral Service, Red Deer AB. A locally owned funeral and cremation provider serving Red Deer and all of Central Alberta    587-876-4944

Share Your Memory of
Marjorie
Upload Your Memory View All Memories
Be the first to upload a memory!