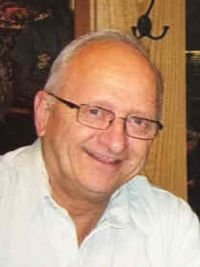 Sherwin Lyle Flanders of Red Deer AB passed away at the Red Deer Hospice October 24, 2019 at the age of 68.

He was born in Trail BC and raised on a farm close to Donalda AB. In 1975 he married Jean Marshall, his lifelong partner and best friend. Sherwin was a dozer operator and truck driver working mostly on pipelines. He and son David had their own pipeline company for a time. In his spare time, he and Jean landscaped and renovated every house they owned. He was a very talented woodworker and made furniture, bowls and pens.

In lieu of flowers, memorial donations may be directed to the ALS Society or the Red Deer Hospice Society.

Condolences to Sherwin’s family may be emailed to meaningful@telus.net. Arrangements in care of Meaningful Memorials Funeral Service, serving Red Deer and all of Central Alberta, 587-876-4944.

Share Your Memory of
Sherwin
Upload Your Memory View All Memories
Be the first to upload a memory!