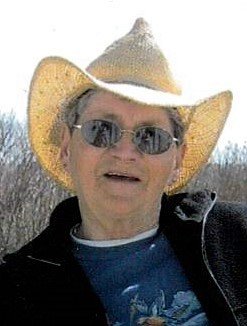 Marjorie Ruth Nicholson of Red Deer passed away Sunday, January 31 after a long and active life. She was 81.

Marjorie was born in Elnora, Alberta in 1939 to Fred and Ruth Lund. The family also included Marjorie’s two brothers, Donny and Harry. Growing up, Marjorie learned to work hard and maintain her independence, virtues that served her well throughout her life.

As a young woman, Marjorie moved to Calgary in 1959. In 1960, she married Darrell Hartley. The couple eagerly welcomed two sons, Dwayne and Darwin.

Marjorie made another move in 1979, this time to Delburne, Alberta, where she restarted her farming career on the original family quarter, which had been in the family since 1902 (and remains in the family today, having received the Centennial Farm Plaque from then-premier Ralph Klein in 2002). Two years later, in 1981, Marjorie married Robert Nicholson.

Marjorie was ambitious and energetic her entire life. She worked at a sanitarium and the Honey Boy Bakery. She was also employed at the McLeod’s hardware store in Red Deer and spent time as a hairdresser. She operated the cattle farm in Delburne on her own from 2004 to 2020. She loved her cattle so much that she gave each cow and calf a name.

Marjorie also found time to participate in the Delburne and Elnora music jams, and played cards each week at the Delburne drop-in centre. She was actively involved in the Cumberland community with community events and annual plays; she was also the “Sunshine Girl,” sending out condolence cards when community families suffered a loss. She loved her neighbours and they loved her.

Marjorie was a kindly neighbour in more ways than one. She had a deep love for the birds and wild animals that shared her land – though she did take issue with some of them. She did not like beavers damming creeks and cutting down trees, porcupines damaging trees, ravens killing ducks and geese, and sparrows and magpies chasing away her songbirds and purple martens. She was proud to maintain a beautiful garden and yard site.

Marjorie was curious and well-read. She took a keen interest in her ancestry and, through much research, tracked her heritage back to Norway. She made several trips overseas to reconnect with distant relatives who became very close and beloved. Those relatives in turn made several trips to Canada to learn about Marjorie and her family.

In lieu of flowers, memorial donations may be directed to Cystic Fibrosis Canada, 2323 Yonge Street, Suite 800, Toronto ON, M4P 2C9; or online here.

Condolences for Marjorie’s family may be emailed to meaningful@telus.net.

Share Your Memory of
Marjorie Ruth
Upload Your Memory View All Memories
Be the first to upload a memory!
Share A Memory