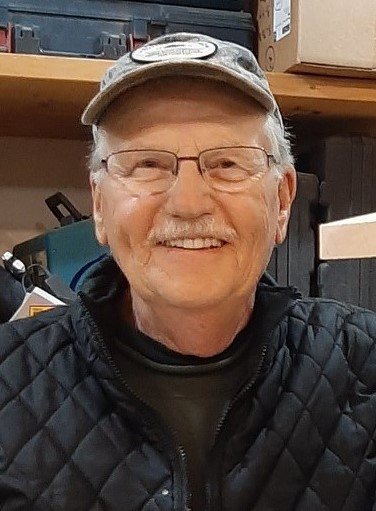 Sidney (Sid) Owen Mihalicz of Lacombe, Alberta passed away peacefully at home on January 29, 2021 with family and friends at his side. Sid’s fight with cancer was one of unyielding boldness and perseverance.

Sid’s time with us was too short, but well-lived. Anyone who knew him would agree that Sid did not spend one idle day in his whole life. Many benefited from his kindness, his huge heart and his mastery in "the shop." He showed his love for those dear to him through the beautiful hand-made wood creations he made for them. From bookshelves to cedar chests, these gifts will be cherished forever by those lucky to have received them.

Sid was born in Medicine Hat, Alberta and shortly thereafter moved with his parents and big sister Colleen to the Mihalicz Family homestead at Cupar, Saskatchewan, where Sid spent his upbringing helping with chores and falling in love with farming.  After graduating from Ag School at the University of Saskatchewan, Sid took over the family farm and true to the Mihalicz way, never shied away from hard work – renovating and building barns for a 200-sow farrow to finish operation. After starting his own family, Sid moved to Regina, Saskatchewan, where he had a successful career traveling southern Saskatchewan aiding farmers with his knowledge of agriculture.

Sid had many hobbies including golf, camping, fishing, woodworking, and photography. Sid’s two daughters share many memories of family camping trips where he kept them busy with scavenger hunts that took them into the woods and across the campgrounds in search of specific types of tree bark and bottle caps.

Later in life Sid moved to Lacombe, Alberta where he met his partner Linda. They shared 22 years together golfing, camping, traveling, gardening and barbecuing. Sid was quick on the take with an offer of a golf game with Linda by his side. No one will truly know just how competitive those games really were, but we know they were enjoyed fully by both.

Work in Lacombe took Sid to many neighbours’ houses, where he renovated bathrooms and kitchens, sometimes entire houses. Working with his hands was always Sid’s favourite type of work as well as pastime. He was also fond of putting on the best barbecue one would ever taste for any or all that were around. This was just one more way Sid showed his care for those who were important to him, as well as any new friends he made.

Sid loved to solve problems, to fix and improve things. He was generous with his time and vast expertise, helping so many people – that is his legacy. He was truly loved by so many.

Sid is survived by his two daughters Tanya (Chris) Elliott and granddaughter Jorja, and Shauna Mihalicz; his partner Linda Murray and her daughters Shannon Marshall and Jeanine (Shaun Heglin and daughter Jasmine) Sears. Sid was the second of four children and is survived by two sisters and one brother: Colleen (Ken) Meyer, Bonnie (Mike McGarity) Mihalicz, and Steve (Sharon Anderson) Mihalicz and eight nieces and nephews as well as Uncles Eugene (Lois) and Rudy (Rose) Mihalicz and Aunt Laura Weiss. He was preceded in death by his parents Steve and Alma (Moench) Mihalicz.

A celebration of Sid’s life will take place during the summer months when we hope Sid’s family and friends will be permitted to gather to share special memories of Sid (Dad).

Heart-felt thanks to Dr. Kaili Hoffart, his Lacombe Home Care team and Shelley Blair for their friendship, guidance and care in Sid’s time of need.

In lieu of flowers, our family would like to mention two organizations who contributed to Sid’s care and support. Memorial donations to The Lending Cupboard in Red Deer, AB (http://lendingcupboard.ca), the Lacombe Palliative Care Society (www.lacombepalliativecare.com), or your favourite charity are appreciated.

Condolences for Sid's family may be emailed to meaningful@telus.net.

Share Your Memory of
Sidney Owen
Upload Your Memory View All Memories
Be the first to upload a memory!