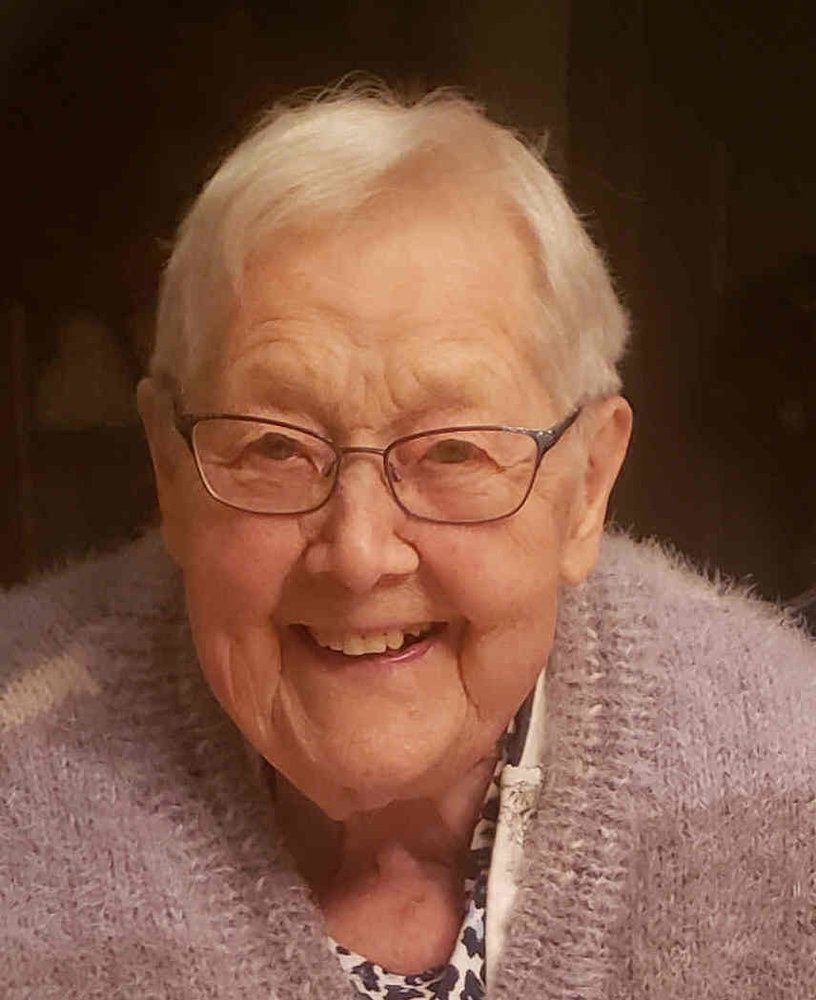 Dorothy Isabelle Suominen (nee Elliott) passed away peacefully in her home at 95 years of age on February 22, 2021. Dorothy was born in 1926, to Helen and Virgil Elliott at the Medicine Hat Hospital. She was the first baby in Southern Alberta that year. The family farmed south of Whitla with lots of horses and cattle. Dorothy was the second oldest of 6 children, and there were many memories made on the farm over the years with all the children and animals. The 1930s were an incredibly challenging time for the family and Dorothy told stories of the dust storms that travelled across the Prairies; this created her disdain for the Southern Alberta wind.

After finishing high school, Dorothy attended Normal School to become a teacher. This was during World War II when teachers were in high demand and her career started in a one-room schoolhouse at Bullshead Butte, south of Seven Persons. She taught in various schools across southern Alberta before settling in Foremost where she taught grades 3 and 4. In Foremost, she met her husband, Mauno Elmer Suominen.

In 1948, they were married in Calgary at the United Church. After the school year, they moved to Calgary where Mauno worked as a Blockman for International Harvester. His region was in Eastern Alberta and he was on the road a lot. Their first house was in the Bowness neighbourhood where they lived when Roxine was born until flooding caused them to move to southwest Calgary. After Keith was born in August of 1952, Dorothy kept busy raising their children, sewing for fun, and receiving her certification as a seamstress.

They moved to Didsbury where Randy was born and had a few years there. Dorothy joined the Lutheran Church in Didsbury where she declared Jesus as her Lord and Saviour. In 1959, the family moved north again to Red Deer where M. Elmer bought the International Harvester dealership called Parkland Equipment. During the years in Red Deer, Dorothy did the company books for a short time and worked in the West Park School and the Red Deer Public Libraries for the months leading up to Cameron’s birth in 1964.

1966 was when the family moved out to the Brookfield district, near Joffre and began to farm. Dorothy was not too thrilled about looking after an old farmyard but quickly realized their boys would thrive on the farm. On the farm, Dorothy worked tirelessly to keep the milk cows, pigs, house, and garden. Dorothy was a 4-H parent and active community member during her time in the Brookfield community. M. Elmer and Dorothy farmed for thirty-one years before retiring to Red Deer and selling the farm to Cam and Annette.

Once retired, Dorothy spent much of her time sewing, baking, and caring for her grandchildren. Their house in Deer Park was home to countless family gatherings and memories for everyone. They were very active in the establishment of the Living Stones Church during their early retirement years.

In 2014, Dorothy, after Elmer passed in 2004, realized her house was too big and moved to Legacy Estates in Clearview, where she spent her final years. She remained devoted to her family once she was living in her apartment. In her last year, she was cared for by Home Care and she was very appreciative of all their help.

The family is very grateful for Dr. C.L. Holmes and Dr. Baker for their care over the years. Also, the Legacy Estates Staff who have treated Dorothy with great respect since she moved in.

A service will be announced at a later date once the COVID-19 social gathering restrictions are relaxed. In lieu of flowers, memorial donations can be made to 100 - Huntley Street, the Central Alberta Humane Society, the STARS foundation or to the Lutheran Church of the Good Shepherd in Red Deer.

Condolences to Dorothy’s family may be emailed to meaningful@telus.net.