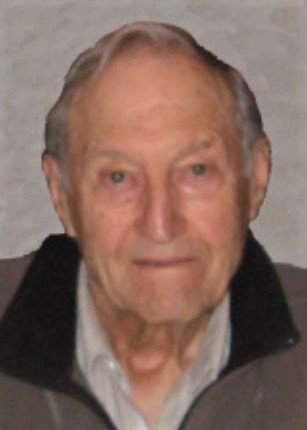 Bob was born in Coronation, Alberta on March 4, 1926. The second of six children, he grew up on the family farm near Fleet, Alberta. After high school, Bob studied aeronautical engineering at SAIT, and later built and flew his own plane. He married Holly Mowers in 1949 and began farming in the Cremona-Carstairs area.

A voracious reader, Bob had a particular love of history and was a wealth of knowledge. He will be remembered by all who knew him for his amazing memory and recall of past events. Bob also had an inquiring mind and paid great attention to detail, journaling most of his adult life. He was keenly interested in the weather and kept meticulous records for Environment Canada for almost 60 years.

Bob could fix anything from farm machinery to hundreds of clocks from all around Alberta and beyond. Woodworking was a favoured pastime and he produced many pieces of fine furniture. He enjoyed travel and saw many parts of the world.

Bob remained fiercely independent until his recent illness. With his family’s support, he was able to live comfortably in his beloved home he built 64 years ago on the farm.

Bob was predeceased by his wife Holly in 1994 and son-in-law John Vlchek in 2018; and infant great-grandson Dexter. He is survived by his six children: Dale (Darlene), Faye, Bev, Jennifer (Jim) Kraft, Jay (Jen Vigano), and John (Lucye); five grandchildren and eight great-grandchildren. He will also be remembered by his sister Helen Erickson of Crossfield.

Special thanks to Dr. Bill Ward and the staff at the Sundre Hospital for making Bob’s last days comfortable.

If one so wishes, memorial donations may be made to Sundre Memorial Park, C/O Sundre Palliative Care Association, Box 1259, Sundre AB, T0M 1X0.

Condolences for Bob’s family may be emailed to meaningful@telus.net.

Share Your Memory of
Robert (Bob)
Upload Your Memory View All Memories
Be the first to upload a memory!
Share A Memory