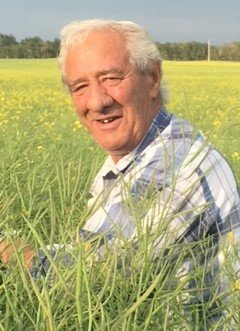 It is with deep regret and profound sadness that the family of Charles Arthur Newton (Charlie) announces his passing on March 16, 2021 at his beloved farm.

Charlie was born in January 1949, the third of five children, middle child and only son to Charles Henry (Harry) Newton and Bessie Jean Newton (Hilditch) of the Penhold area in Red Deer County.

Charlie was a born farmer, following the passion of his father and his Uncles Reg, Dick and Art Newton. He passed that passion on to his own son and family and rejoiced in watching their interests grow. He was happiest on the farm with family and friends surrounding him. His gregarious nature made him friends to many. He was always willing to share his interests of farming, curling, fishing, and hunting. Many life-long friendships started from school days, at a curling rink, auction sale, coffee shop or the town pub.

Charlie started his vocation of being a farmer under the tutelage of his father at a very young age. He enjoyed the outdoors and learning about animals, crops and machinery. Charlie could be found raking hay in the Penhold area for his dad and uncles, driving grain truck at harvest and raising his own hogs, at the same time attending school.

The marriage of Charlie to Sandra (McArthur) in 1973, led to a loving relationship and productive life on the farm. This union produced two children, of whom he was very proud; daughter, Tracy (Cole) Hauck, and son Wes (Lisa) Newton. He rejoiced in the birth of four beautiful grandchildren; Emma (23) and Abby Hauck (20) born to Tracy and Cole and raised in the city of Brooks, Alberta; and Ellie (14) and Charlie Newton (11) born to Wes and Lisa who live on the farm and carry on the traditions taught by Grandpa Charlie. He was devoted to the well-being of them all and he was very proud of their abilities and successes.

Charlie was known for his hard-work ethic, straight-shooting common sense, and almost brutal honesty, as he built and maintained many long-term relationships.

We will miss him.

Charlie is survived by his wife of 47 years, Sandy (McArthur); daughter Tracy (Cole) and their children Emma and Abby; and son and farming partner Wes (Lisa) and their children Ellie and Charlie. Charlie is also survived by his four sisters, Mary Newton (Al Mayo) of Bassano, Shirley Johnson, Lynda Newton, and Sharon Newton (Rob Fisher) of Calgary, AB and their families spread throughout Alberta and into the US. He was predeceased by his parents, Charles Henry (Harry) and Bessie Jean (Hilditch) Newton, Sandy’s parents, A.J.(Mac) and Joyce McArthur, and his brother-in-law Derek Johnson.

No service will be held at this time due to social gathering restrictions.

In lieu of flowers, memorial donations may be made to the Heart and Stroke Foundation, Alberta and Northwest Territories Office, 100-119 14 Street NW, Calgary AB, T2N 1Z6; or online here.

Condolences for Charlie's family may be emailed to meaningful@telus.net.

Share Your Memory of
Charles Arthur (Charlie)
Upload Your Memory View All Memories
Be the first to upload a memory!
Share A Memory