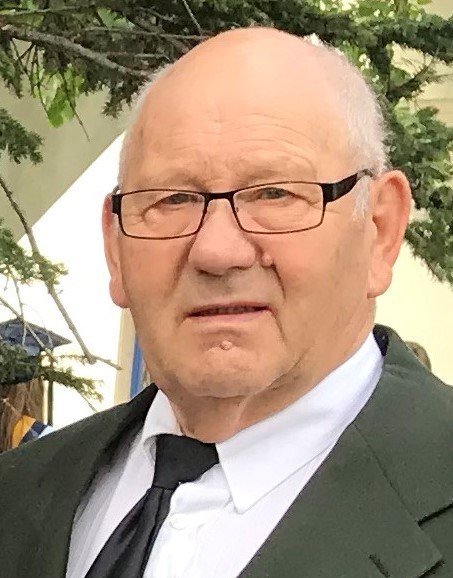 Howard Garfield McMullen was born in August 1939 at Coronation Hospital, the only child of Garfield and Esther McMullen. He was raised on the family farm north of Veteran, Alberta. He attended two country schools for grades 1 through 9, riding his pony to and from. For grade 10, he rode the bus to Hughenden Central High.

During the winters of 1958 and 1959, Howard attended SAIT in Calgary, taking Agricultural Mechanics. In 1960, he began his electrical apprenticeship with Industrial Power, working on the expansion of Red Deer Regional Hospital. He spent the greater part of his four years of apprenticeship there. He was a jack of all trades and a master of one. There was very little he couldn’t build or fix.

In 1962, he married Elaine Homan of Amisk, Alberta, whom he met in Red Deer despite having grown up within 40 miles of one another. To this union, five children arrived: daughter Carolyn in May 1966 – stillborn, son Jason in December 1966, daughter Deanna in December 1967, son Troy in December 1970, and daughter Tracy in October 1973.

Howard was always a very busy person. If he wasn’t busy, he was sleeping. He loved his toys all through life. As a child, he spent hours farming a little patch beside the house with his toy machinery. He had numerous pets over the years, which included dogs, cats, and horses.

As he got older, the toys got bigger. Howard built our first truck camper, which we used a lot for several years. Throughout our life, we had several different travel trailers and motorhomes, which we went camping in a lot. He had snowmobiles, an Argo, motorcycles, boat, quads and finally a side-by-side ATV until about five years ago. In the mid-1980s, with the help of about five friends out at Woody Acres at Coronation, he build a travel trailer that could carry two quads inside that we used for a long time.

In 1964, we left Red Deer to return to the McMullen family farm. There, we grain-farmed and had a beef herd and Howard did electrical work on the side. In 1970, we added a dairy herd and Wes and Jean Bischke joined us. In 1974, we sold out to the Bishke’s and moved into Coronation. Howard had a Caterpillar business for a couple of years, but soon went back to being an electrician full-time. By this time he had his Master Electrician ticket. We added a mobile home sales business along with Ken Anderson and Gordon McLarty for a few years.

In the late 1970s, Howard got his pilot’s licence and owned a small airplane for a few years.

In 1990, we moved back to Red Deer to be near Howard’s Mom, who was by herself. Howard went to work for Triple A Electric for 15 years before retiring in 2004.

In 2003, we joined Bighorn ATV Society out of Rocky Mountain House and spent 15 or so years doing quad trail maintenance out west. We adopted a trail called “McMullen Family and Friends” at Bighorn Dam on Lake Abraham west of Nordegg.

After Howard retired, he spent a few years heading out to Woody Acres at Coronation to help with seeding in the spring and harvesting in the fall. He thoroughly looked forward to it and was sad when it got too much for him to handle.

Howard liked to travel and we had many memorable trips to Disneyland, San Francisco, Lake Athabasca, Ontario, throughout B.C. and Vancouver Island, Arizona, Alaska, Saskatchewan, and all over Alberta.

Howard was a very social person and would strike up a conversation with strangers everywhere. He loved visiting and if he couldn’t go somewhere, he was on the phone with someone. He had at least three coffee groups.

Howard had a very dry sense of humour and loved making comments just to get a rise out of people, especially Elaine, which he managed to do quite successfully for 58 years.

In lieu of flowers, memorial donations may be directed to the Heart and Stroke Foundation, Alberta and Northwest Territories Office, 100-119 14 Street NW Calgary AB, T2N 1Z6 or online here; or a charity of one’s choice.

Condolences for Howard’s family may be emailed to meaningful@telus.net.

Share Your Memory of
Howard Garfield
Upload Your Memory View All Memories
Be the first to upload a memory!
Share A Memory