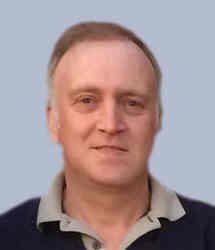 Timothy “Tim” Gordon Hillman of Red Deer passed away suddenly and unexpectedly at the Red Deer Regional Hospital Centre surrounded by his family on December 3, 2019 at the age of 45 years following a brief but courageous battle with cancer.

Tim was born in Drumheller where he spent his early school years, moving with his family to Red Deer in 1983. Tim was well known in business during his years with his siblings in VHQ Video Headquarters / Video View. He also operated his own business Simple Surveillance and Security installing camera and alarm systems around central Alberta.

Tim’s warm and outgoing personality made him a friend to many of his customers. Tim’s pride and joy were his daughter Emily and his golden retrievers Baxter and Piper. He had a special group of friends with his Boston Pizza family as well as his long-time school buddy since grade 4, Jason Greenlee.

Tim will be lovingly remembered by his parents Joanne and Gordon Hillman; sisters Tari (Rollie) Gervais and Tracy Hillman; his daughter Emily and her mother Kim Clements all of Red Deer as well as numerous other family members and friends. He was predeceased by his brother Trevor in March of 2009.

Condolences to Tim’s family may be emailed to meaningful@telus.net. Arrangements in care of Meaningful Memorials Funeral Service, serving Red Deer and all of central Alberta since 2011. 587-876-4944.

Share Your Memory of
Tim
Upload Your Memory View All Memories
Be the first to upload a memory!