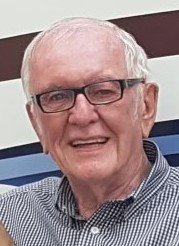 Clem was born in Radville, Saskatchewan in August 1940, the first of four children to Theodore and Azilda Dedora. Clem passed away on April 12, 2021 at the age of 80 years.

Almost 60 years ago, Clem married Flora June (nee Grant) They followed Clem’s oilfield career to Alberta and lived in many small communities before retiring in Olds and then Red Deer. They enjoyed camping and boating in the summer with downhill skiing and curling throughout the winter.

Clem was predeceased by his parents, Theodore and Azilda, step father Eddie Ror, and his in-laws John and Evelyn Grant. Along with a large extended family, Clem is survived by his brother Douglas (Elaine) Dedora and two sisters, Pat Doud and Doreen (Rick) Erick, as well as many nieces and nephews.

A private memorial will be held for Clem.

In lieu of flowers, donations would be graciously accepted by the Red Deer Hospital Foundation, Ponoka and District Health Foundation and Extendicare Michener Hill. The family greatly appreciated the compassion and care provided by all three facilities.

Condolences for Clem's family may be emailed to meaningful@telus.net.

Share Your Memory of
Clement Eugene
Upload Your Memory View All Memories
Be the first to upload a memory!
Share A Memory