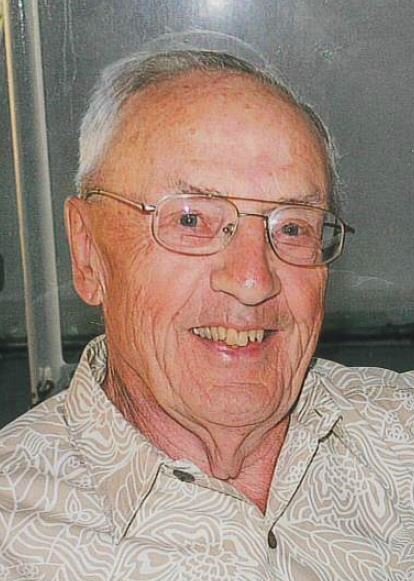 Retired Superintendent Bob Latremouille was transferred to his final posting on May 7, 2021. Bob was born in September 1930 in Kamloops, BC and was raised on the family homestead in Little Fort, BC with his four brothers and two sisters.

Bob joined the Royal Canadian Mounted Police in 1953 and was posted to D Division. He met telephone operator Carol Sproxton in Flin Flon, Manitoba and they married in 1958. Joe and Donna were born in Dauphin, and Susan in Winnipeg.

After a short posting to Ottawa, where Bob was promoted to officer, the family was transferred to his favourite posting, G Division. Bob was very proud that he had the opportunity to travel to every community in the NWT and what is now Nunavut. Bob was honoured to be appointed Aide de Camp to Commissioner of the NWT John Parker.

Before retiring, Bob’s last assignment was to F Division. After traipsing around the country after Bob for more than 30 years, Bob let Carol choose where they would retire and they have made Red Deer their home since 1989.

Bob was fortunate to enjoy a long retirement. He learned to golf, spent countless hours enjoying the outdoors, and shared the love of the sport with his family. In total, Bob shot 12 holes in one, including two in one round in 1999. He loved to travel and meet new people. He and Carol travelled to every province and territory, went on cruises, and saw many European countries, but Hawaii was his favourite vacation spot.

Bob was very involved in the community and supporting the kids’ activities, notably little league baseball, scouts, minor hockey, Yellowknife Swim Club, and Sport North. He volunteered at several Arctic Winter Games, managed the NWT Canada Games swim team in 1981, and was chosen as Sport North’s Contributor to Sport in 1984. After retiring, Bob volunteered at the Red Deer Legion, organizing the poppy campaign for several years, and rang the bells for the Salvation Army up until last Christmas. We are thankful he instilled the importance of volunteering in all of us.

Bob was a very humble man who was immensely proud of his family. He will be greatly missed by his wife of 63 years, Carol; children Joe (Rose), Donna, and Susan (Mike) Huvenaars; grandchildren Robert (Sheena), Michelle, Greg, and James (Rosie); and great-grandson Domenic. Bob is also survived by his sister Lyda (John) Eastman and a large extended family.

At Bob’s request, there will be no funeral.

We are grateful for the love and support of family and friends.

Condolences to Bob’s family may be emailed to meaningful@telus.net.

Share Your Memory of
Charles Robert Franklin "Bob"
Upload Your Memory View All Memories
Be the first to upload a memory!
Share A Memory