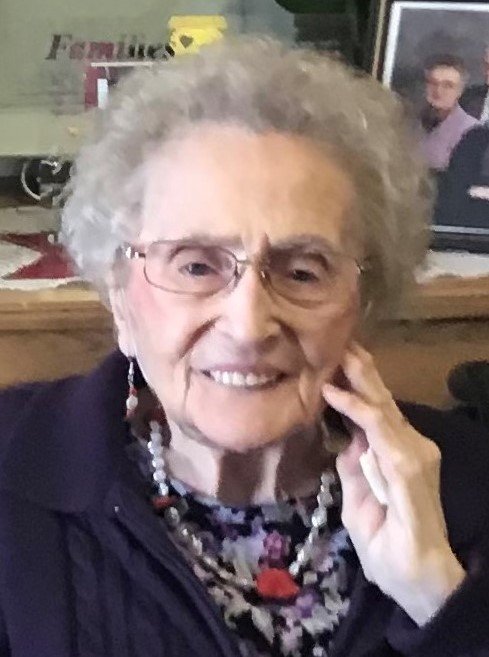 It is with great sadness that the family of Helen Pugh announces her passing on May 30, 2021 at Michener Extendicare in Red Deer.

Helen, a proud centurium, was born in February 1921 to Fred and Eva Fjeldheim, and they lived east of Ponoka in the Asker district. She had one sister, Lila Griffiths. On June 8, 1941, she married Kenneth Pugh. They lived in many small Alberta towns before ending up in Red Deer in 1953. Helen and Ken had two sons, Leonard and Gerald. They bought and sold houses around Red Deer prior to moving to Sylvan Lake in 1969.

Helen held many jobs, starting at Maurice Shoes, then Barretts Meat Market, followed by The Bay, where she worked for 13 years in the shoe department, happily fitting many Red Deerians with their shoes. She made many lifelong friends at these jobs.

Helen was very active in her community. She sang with the United Church choir and with the Sweet Adelaides. She was a member of the Rebecca Lodge. Being a founding member of the Parkvale estates, she spent many years as a board member of their association. She loved playing cards and running garage sales, where her selling ability shone through. There were no better garage sales than Helen's.

Helen and Ken loved living at the lake, where they spent a lot of time waterskiing and fishing with family. They also did a lot of camping around Alberta. Ken and Helen enjoyed travelling and they made two trips to Norway. They also spent 15 years going down to Mesa, Arizona for the winters.

In 1985, Helen and Ken sold their place in Sylvan Lake and moved back to Red Deer, where they retired in Parkvale Estates. In April 2000, Ken passed away. Helen stayed in Parkville Estates until 2007, when she moved to the Parkvale Lodge. Her last 10 years were spent at Michener Extendicare.

Jerry and Lucy are blessed with two children, Wade and Kari and five grandchildren. Len and Doreen had two sons, Trent and Kelly. Len and Bea have two girls, Leah and Kristine, seven grandchildren and four great-grandchildren.

At Michener, Helen received excellent care and was very fond of her nursing staff. The family would like to thank the staff for the wonderful care that she was given during her 10 years there.

A private graveside service has been held.

Condolences for Helen's family may be emailed to meaningful@telus.net.

Share Your Memory of
Helen Anna Margaret
Upload Your Memory View All Memories
Be the first to upload a memory!
Share A Memory