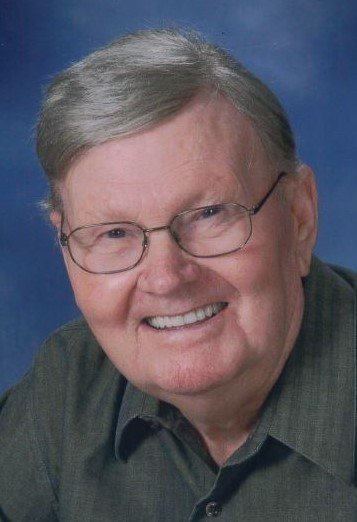 Lowell was born in Stettler in 1932, a son for Iver and Ruth Holm and a brother for Lyle, Dallas and Bud. He grew up in the Botha area, where he attended school and became known for his shortstop expertise and his goalie skills. As a young man, Lowell received his plumbing and gas-fitting certificate from SAIT and began a successful and rewarding career in the plumbing trade.

In 1958, Lowell married Shirley Penosky and four years later moved to Red Deer with daughters, Merrilyn and Wendyle. There, Lowell worked as a plumber for Hayhoe’s Plumbing and Shirley worked as a dietician in the health field.

Lowell and Shirley became “rock hounds” in the Red Deer Rock and Gem Club and archers upon joining the local archery club. Family life was rich with camping and skiing in the mountains of Alberta and British Columbia.

After joining the Central Alberta Auto Club, Lowell restored a long list of cars and was always on the lookout for the next rusty “diamond in the rough.” Lowell’s pride and joy was a 1934 Graham Paige that he showed in car meets in Alberta and Montana.

In the 1970s, Lowell designed and welded metal sculptures and successfully sold his creations at a downtown gift store.

In 1975, Lowell formed his own plumbing and heating company and serviced the Red Deer Public Schools and private residential contracts until his retirement in 1990.

Over the years, Lowell and Shirley designed and built executive homes in the city of Red Deer and on the Red Deer River. As well, they built a cabin on Lake Windermere, BC, spending many happy times there with family and friends.

Lowell and Shirley retired in 1990, sold the cabin, bought a condo in Red Deer, and purchased property in Mesa, Arizona. In Mesa, they enjoyed 20 happy and fun-filled winters and made lifelong friends. Lowell became skilled as a wood carver and lathe operator, and being such a handy guy, readily helped neighbours with small fix-it jobs and assisted with larger projects in the Greenfield community. He also now had time for golf, where he enjoyed equally the game and the fellowship…and his hole-in-one!

In later years, Lowell coped with health issues but, regardless, always had time for family. His beloved Shirley, who was by his side for 62 years, daughters Merrilyn (spouse Greg Roth and children Berkley, Aimee and Rob) and Wendyle (spouse Bill Gillis and children Ryan, Shaun and Kelly) and their families were paramount. And though Uncle Lowell was a feared “knuckle-cracker” with his nephews, raging laughter resulted. His kindness, patience and sense of humour shone through. This was especially evident when it came to projects; none were too large. In fact, Lowell’s motto was: Every job needs a new tool. He loved barbecued tenderloin steak and disliked green vegetables, immensely.

Lowell was a role model for so many in his life. His work ethic, devotion to family, many creative talents, sense of humour and willingness to help others are his legacy, and will be remembered by those who knew and loved him.

Shirley, Merrilyn and Wendyle want to thank extended family and friends for their support when Lowell was in Extendicare. Their kindness was truly appreciated. Also, a special thanks to the Extendicare Team for their compassionate care over the past two years.

Lowell will be laid to rest in the Woodland Cemetery in Botha, Alberta.

In lieu of flowers, donations may be made to the charity of your choice.

Share Your Memory of
Lowell Dwain
Upload Your Memory View All Memories
Be the first to upload a memory!
Share A Memory