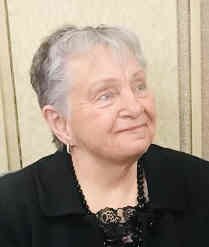 Jo Anne Ponevas (DeWitt) of High River, Alberta passed away peacefully while camping at her dear friend’s farm near Rimbey, Alberta on June 13, 2021. She was 75 years of age.

Jo was born in July 1945 in McAdam, New Brunswick to William and Margaret DeWitt. The family soon grew to include 10 children in total. As Jo was one of the oldest, she was a huge help to her parents, especially with her younger twin brother and sister. She married John Ansems in 1966 and settled in Nova Scotia working on her in-laws’ farms. She soon started her own large family and had four children in a short succession. During those busy years, the family relocated to PEI, where she stayed for many years.

After the passing of her husband John, Jo married Tom Scott in 1974 and added two more children to the family. Those were certainly busy years and she never shied away from hard work to help provide for her family, whether it be farming or commercial cleaning. Jo would do whatever was needed to keep things going, even if it meant rebuilding car engines with her sons.

Jo began studying the Bible in 1974 with her dear friend Nellie, and was baptized as one of Jehovah’s Witnesses on July 12, 1975. She was fully devoted in her service to her God, and spent countless hours volunteering in the ministry and studying the Bible with others. She helped many in her endeavours and gained many lifelong friends in the process.

Her husband Tom passed away from a lengthy illness in 1999 and Jo had no plans on remarriage at the time. However, she soon met a fellow believer and began the next chapter of her life. She married Alfred Ponevas on July 22, 2000 and relocated to her husband’s farm in Manitoba. In her typical fearless style, she got her Class 1 license so she could drive semi across Canada and the USA with Alfred. She also drove handi-van, worked in health care and did commercial cleaning. They enjoyed 11 wonderful years in Manitoba, with many visits to family in PEI, Ontario and Alberta.

In 2011, Jo and Alfred moved out west and happily settled in High River, Alberta. In true fashion, Jo continued busy in her ministry and made many more close friends in Alberta. Unfortunately, she started to suffer from some serious health issues after a few years and was not happy that she had to take it a little easier. But she soon started enjoying her retirement and enjoyed travelling and spending more time in her Bible teaching work. She was cared for diligently by Alfred until her passing. Her firm hope of the Bible’s promises of a resurrection onto paradise earth certainly sustained her and gave her much peace of mind despite her trials (John 11:25; Psalms 37:11).

We would like to especially thank Tom and Krystal Woodliffe, who assisted Alfred after the sudden passing of his wife, as well as the EMS and RCMP who promptly arrived at the farm.

The outpouring of love and support has been amazing and greatly appreciated.

Due to COVID restrictions and the huge amount of family and friends spread across the country, we will be holding a Zoom Memorial Service on Thursday, July 1, 2021 at 1:00 pm (MST)

Condolences to Jo’s family may be emailed to meaningful@telus.net.

Share Your Memory of
Jo Anne
Upload Your Memory View All Memories
Be the first to upload a memory!
Share A Memory