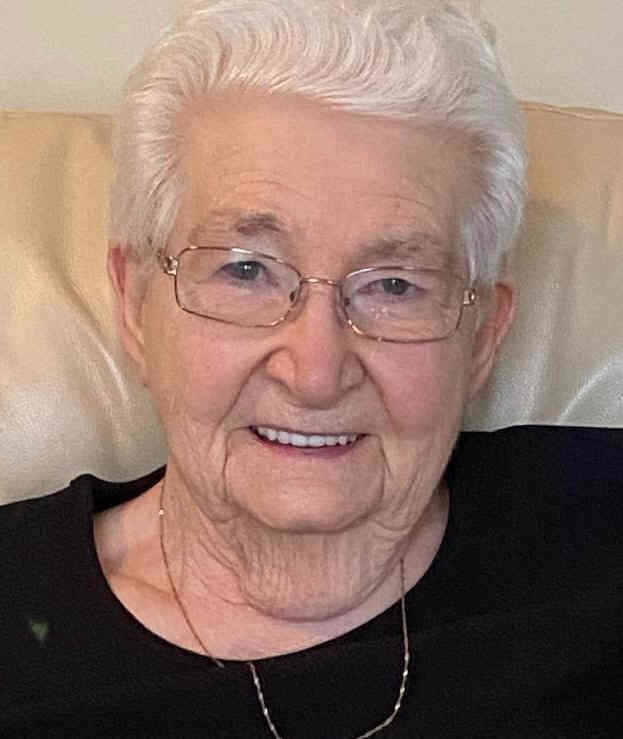 Katherine Wheeler passed away on August 2, 2021 at the Red Deer Regional Hospital Centre at the age of 84 years.

Mom was born on January 18, 1937, in the family farmhouse in the Mennonite community of Stanley Municipality in southern Manitoba. She was raised on the farm by her parent’s Herman and Justina Letkeman along with her 5 siblings.  Working on the farm was more important than education so she left school in grade 8 to help on the farm.  Working and the church were an essential part of life.

In 1956,  she met Peter Wheeler at a wedding she was attending, they were married on August 19 of that year.  They started their married life living with the parents, something Mom told us never, ever to do, it was not a good idea.  They did finally get a small trailer and headed west to find work in the oilfield. In this small trailer, they started their family with the birth of their first son Clifford on October 14, 1960, in Estevan Saskatchewan.  Mom always told us the story of not going to the Doctor until she was six months pregnant because she knew she was pregnant and didn’t need a doctor to tell her so! Their second son Leonard was born on November 6th of 1961 in Maple Creek Saskatchewan. Still living in the small trailer as they headed west.  In April of 1964, Mom and Dad were delighted to have their daughter Beverly in Medicine Hat Alberta. Moving with the work, Mom and Dad finally settled in Red Deer, Alberta in 1969, with the birth of their third son Darryl in February of 1971. I think Mom was happy to finally be in one place. The birth of their final child was front page news in the Red Deer Advocate as Robert was the New Year’s baby of 1974.

We continued to live in Les’s Trailer court outside of Red Deer for the next several years where we met many good neighbors and friends. She listened to CFCW every morning to get the calendar number, I don’t think her number was ever drawn but she always kept trying. In 1980, Dad decided to move the family into the city, which was a big change for all of us.  With the economy in recession and Dad working out of town, Mom went to work as a chambermaid at the Thunderbird Motel in Gasoline Alley.   After a few years Mom went to work at the North Hill Inn as a chambermaid, Mom worked hard and still continued to make a home for all of us and never complained!!  We enjoyed many trips to the mountains and always had a yearly trip  to visit all the relatives in Manitoba.   As our family grew with the marriage of Bev and Dave, the coupling of Cliff and Shelley and then the marriage of Leo and Cindy, our supper table was growing.  A year after Leo and Cindy got married came Mom’s first grandchild Cassandra followed by DJ. Next came Bev and Dave’s children Cody and Mom’s namesake Katherine, our Katie!!  Mom loved being a Grandma and Great Grandma they brought great joy in her life.  Mom became a Great Grandmother when Dustin and Cassandra’s daughter Liesel was born in January of 2016 and then DJ and Hannah welcomed a great grandson Maverick into the family in June of 2017.

In 1995, Dad suffered a major heart attack and bypass surgery which led to his retirement.  Mom and Dad continued to travel and explore new things.  In 1999, they moved to Waskasoo Estates to live out their retirement.  Their grandson Cody got a paper route in the park, so it was a great joy to them to see Bev and her kids every day often helping Cody deliver his papers, it was always a special day when Grandma baked buns, a very special treat for after school!!  In 2001, the tragic death of our brother Bob shook our family.  It was a great loss to everyone.  In May of 2005 Dad passed.  Mom had to learn to live on her own for the first time in her life.  Of course, we all rallied to help Mom with the yard work and shovelling snow in the winter.  Mom became a Red Deer Rebels fan when she became a season ticket holder.  One game someone was sitting in her seat when she arrived, Mom clapped her hands and that person moved!!!  Mom also joined us on many vacations and saw parts of the world I don’t think she ever thought she would see.  What great memories we made on those many cruises we took.

In 2019, Mom moved to Bethany Collegeside into a one-bedroom suite of which she was very proud. No more cooking and cleaning!!!!  She lived her remaining years here making new friends and catching up with old ones.  She enjoyed playing Canasta and having someone to talk to at lunch and dinner.  Mom was challenged with some medical complications in the last 6 months to which she never fully recovered.

A Celebration of Katherine’s life will be held on Tuesday, August 10, 2021 at CrossRoads Church, Red Deer County at 11:00 am. Condolences to Katherine's family may be emailed to meaningfulmemorials@yahoo.ca.

Share Your Memory of
Katherine
Upload Your Memory View All Memories
Be the first to upload a memory!
Share A Memory