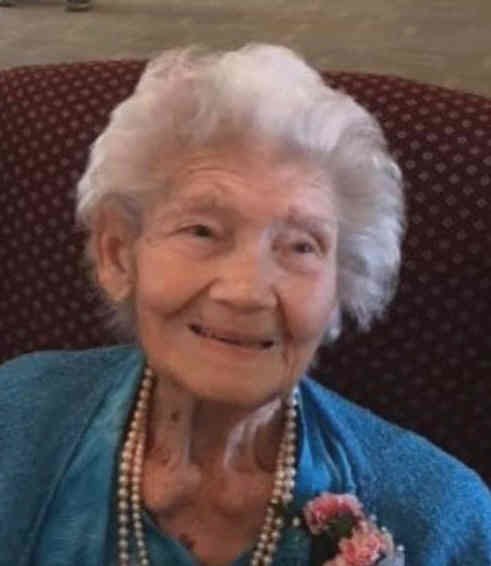 Wilhelmina “Minnie” Deibert of Red Deer, Alberta passed away in her home surrounded by family on December 13th, 2019 at the age of 102 years.

Minnie was born on her family homestead near Denzil, Saskatchewan. As a girl she worked on the farm doing “man’s work” on her father’s fields and mandatory farm and household chores. Minnie went to Vancouver to seek a job. She boarded with a family who had a Denzil-connection and a male member of that family deterred the young Minnie from applying for the unconventional job as shipyard worker.  Instead, he helped Minnie find a job as a waitress at a restaurant located on Hastings Street.

Minnie married George Deibert. She became not only a farmer’s wife, but a stepmother of two very young girls and a care-giver to a sister-in-law. Minnie and George’s family expanded to an additional two boys and six girls. Minnie’s life can be summed-up in three parts: 1/3 single, female “chore-boy” on her parent’s farm; 1/3 married, mother working on her husband’s farm; and 1/3 widowed, retiree living in Red Deer with many of her children. She saw her purpose-in-life to be of service to others and she expressed her faith in the Sacred Heart R.C. churches in Denzil and Red Deer, respectively.

Condolences to Wilhelmina’s family may be e-mailed to meaningful@telus.net.  Arrangements in care of Meaningful Memorials Funeral Service, Red Deer AB  587-876-4944.

Share Your Memory of
Minnie
Upload Your Memory View All Memories
Be the first to upload a memory!