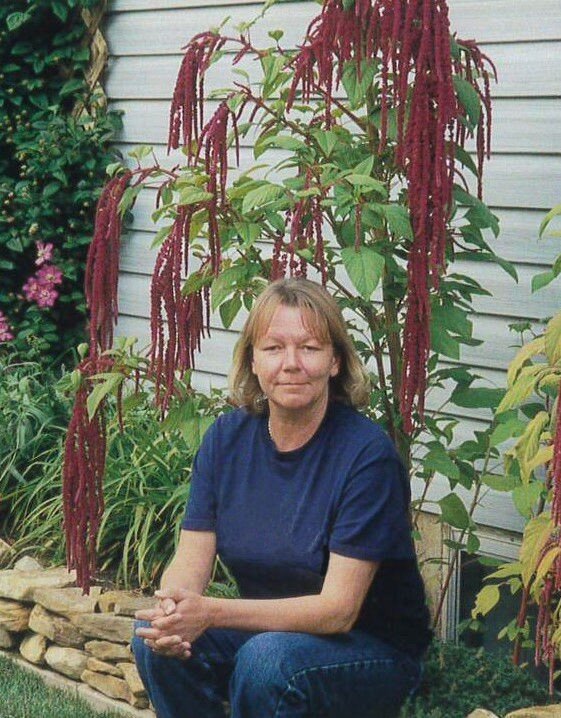 Leah Anne Clarke of Lacombe, Alberta passed away peacefully in her husband’s arms on Friday September 3, 2021 at the Lacombe Hospital and Care Centre at the age of 63 years.

Leah was born at the Holy Cross Hospital in Calgary in 1958, the youngest of six children born to Norman and Margaret Satre (nee Trout). The family lived in Calgary until Leah was in grade 2, when they moved to Okotoks, where she attended school through grade 12.

After finishing school, Leah lived in Swan Hills, Red Deer, Osoyoos and Stettler, where she met Keith Clarke, her husband and best friend of 42 years. Leah and Keith were married at the Stettler United Church on May 26, 1979. They soon moved to Alix, where they built a new home and started a family with the arrival of daughter Karen and son Kevin. Leah pitched in in a major way with the design and construction of the new home and later volunteered at her children’s school by helping the kindergarten and grade 1 teachers in the classroom. She worked tirelessly designing costumes and organizing carnivals for figure skating and with minor hockey in Alix.

In 1990 the family moved to Lacombe into a home they renovated, and subsequently into two homes in which they did a large part of the construction and landscaping (the last one being their retirement home). Leah’s eye for design in construction, interior decorating and landscaping made her homes beautiful.

In 1991 Leah started working in the dietary department at the Lacombe hospital. She worked there until her illness sidelined her 30 years later in 2021. Leah made many good friends at the hospital. There was a loyalty and comraderie and caring attitude shared between Leah and nursing, dietary, housekeeping and maintenance and many doctors. Outside of work, these work” buds” of hers were involved in boot camp and trips to the gym and paint parties, some of which Leah hosted in her home. With others she shared landscaping ideas and materials like plants, shrubs and baking that she loved. This loyalty and respect was truly reflected by the comfort, care and attention given during her stay at the hospital. The mini visits were cherished! Leah made good friends easily and even late in her life became endeared with two special people that worked voluntarily on her legacy projects with her.

The family began to expand with the arrival of Leah’s  “most special people” – her grandchildren Claire (November 2013) and Chloe (September 2016), born to Kevin and Brittany Clarke; and Gabriel (September 2016), born to Karen Clarke. These children were precious and Leah made photo albums of each child depicting activities chronologically arranged from birth onward, with each picture footnoted with beautiful calligraphy to be a keepsake for each child.

Leah was very accomplished in many types of art, wood carving, pointillism, painting, and scrapbooking complete with calligraphy. Her house is adorned with many of her pieces. Near the end she gifted art pieces to family members and friends, only regretting that she missed some folks.

Leah will be lovingly remembered by her husband Keith; daughter Karen (Gabriel); son and daughter-in-law Kevin and Brittany (Claire) and (Chloe) and step daughter Sonya (Kaylee) (Cole and Kristen) (Blayke and Hallie); sister Ardith (Wayne) MacNeil; brother John (Raven) Satre; the Perrys; the MacNeills; the Gardiners; all of the Satre and Clarke families; and all of her “buds.”

Service details will be announced at a later date.

Condolences for Leah’s family may be emailed to meaningful@telus.net.

Share Your Memory of
Leah Anne
Upload Your Memory View All Memories
Be the first to upload a memory!
Share A Memory