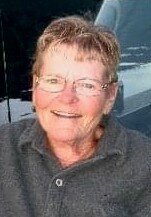 Shirley Thompson of Red Deer, Alberta passed away at the Red Deer Hospice on September 15, 2021 at the age of 77 years.

Shirley was born in 1943 in Lloydminster, Saskatchewan. She was raised in the Lacombe, Alberta area and was avid in the 4H Club and music at her church, playing the organ and the accordion. As the oldest of eight brothers and sisters, Shirley was often a helping hand for her mother and father around their farm.

At the age of 19, Shirley married Robert and they spent many years travelling the world before having their three daughters. Shirley established a career in financial lending and was with Parkland Savings and Credit Union for over 25 years before retiring in 2001. Shirley diligently supported her community, campaigning year after year for charities such as the Heart and Stroke Foundation, Canadian Lung Association as well as others.

In retirement, Shirley spent much of her time with her six grandchildren, and recent years brought her the opportunity to develop a close bond with her one great-grandson, Turner.

A private memorial gathering will be held at a later date.

In lieu of flowers, memorial donations may be made to the Red Deer Hospice Society, 99 Arnot Ave, Red Deer AB, T4R 3S6; or online here.

Condolences for Shirley’s family may be emailed to meaningful@telus.net.

Share Your Memory of
Shirley
Upload Your Memory View All Memories
Be the first to upload a memory!
Share A Memory