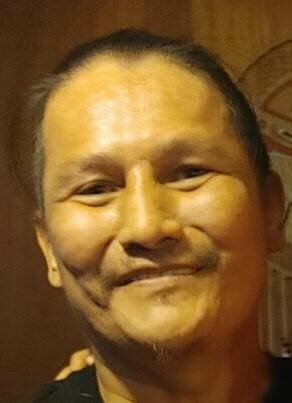 We are deeply saddened by the loss of a gentle human being with a heart of gold. Barry Evan Redcalf of Red Deer, Alberta passed away at the Red Deer Regional Hospital Centre on October 11, 2021 at the age of 51 years.

Barry was born by Diamond Hill, on the side of the road enroute to the Rocky Mountain House Hospital. He was delivered by his Moushum Shorty Redcalf, who later raised Barry (with the help of his wife Charlotte) into the kind, gentle, loving man he became.

Barry was also known as Moodum, Milo, Bear and Daddio. He was a caring, soft-spoken, polite, thoughtful, gracious, humble and gentle soul. He had the biggest heart and smile. He was quick to crack a joke and share his infectious laugh and sense of humour. He loved to laugh, especially at random jokes (even when you didn’t know he was listening, he always was). He was always the first to offer help to anyone who needed it.

Barry was gifted with a strong intuition. He was in tune with his senses and always had a way of understanding the energy around him. He could sense things coming and was never wrong about it. He touched many hearts, from Rocky Mountain House and Sylvan Lake to Lac La Biche and his First Nation of Sunchild. He had so much patience and kindness in his voice and heart.

Barry enjoyed listening to music, attending concerts, skating and watching his favourite TV shows and movies, namely Star Trek, Seinfeld and Three’s Company. Barry was a wonderful husband, father, grandfather, uncle, cousin, nephew, friend, best friend and cherished grandson who was so loved by many. He was a loving family man who cherished time with his grandchildren. Barry loved his wife, children, and grandchildren so very much; everything he ever did was for them.

Barry was a loving husband to his wife, Crystal Blood. Barry and Crystal were together for 35 years, a love that began when they were teenagers and outlasted all of the trials and tribulations of life. Whenever Barry saw Crystal, the look in his eyes was always so special and full of love. Fly high, my love; I love you always and forever. I miss you, Hunny!

Barry was predeceased by his daughter Janet Blood; his grandparents Shorty and Charlotte Redcalf; his parents Charlie Firingstoney and Janet Redcalf; his brother Ernest Redcalf; his foster fathers Everett Clark and Larry Stewart; and his grandmother Mary John.

We have lost a true gentleman. Everyone who met Barry knew he was the kindest, gentlest man, who truly was a wonderful person. He could make anyone around him feel comfortable with his easygoing style and calming demeanor. He was the type of man who would do anything for anyone at any time in any place. He was a quiet man, an incredible listener who genuinely cared about what people shared with him. Everyone who knew him is feeling the deep loss of a good, kind and genuine man who went too soon.

A Celebration of Barry’s life will be held at a later date.

Condolences for Barry’s family may be emailed to meaningful@telus.net.

Share Your Memory of
Barry
Upload Your Memory View All Memories
Be the first to upload a memory!
Share A Memory