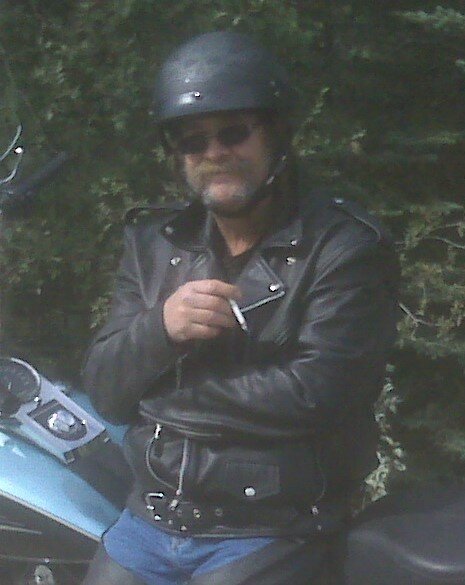 David Alan Galloway of Rocky Mountain House, Alberta passed away suddenly on October 11, 2021 at the age of 60 years.

David was born in 1961 in Rocky Mountain House, the second son to Harold and Frances Galloway. He grew up playing hockey and baseball with his friends from the neighbourhood. He quit school at 16 to work in a thriving oilpatch. At 18, he got married, but the marriage did not last.

David then moved to Edmonton and somehow acquired a job as a zookeeper at the West Edmonton Mall. Dave was well suited to his position and remained there for quite a few years. While working at the mall, David met his wife Shelley, with whom he had a son, Corey.

When his second marriage dissolved, David moved back to Rocky Mountain House and went to work in the oilpatch again. During this time, he acquired his GED.

One of David's favourite pastimes was hopping on his Harley for a ride with his brother and his riding friends, stopping for a beer along the way. David helped take care of his parents until his mom passed in 2019 due to cancer, and his dad went into a nursing home in 2020.

David is lovingly remembered by son Corey Galloway of Williams Lake, BC; brother Douglas (Patty) Galloway; father Harold Galloway; nephew Logan (Justice) Bennett; and niece Robin (John) Colby and Sienna and Audrey. He was predeceased by his mother Frances Galloway and his paternal and maternal grandparents.

At this time, no memorial service will be held due to COVID restrictions. There will be a private family interment.

Condolences for David’s family may be emailed to meaningful@telus.net.

Share Your Memory of
David Alan
Upload Your Memory View All Memories
Be the first to upload a memory!
Share A Memory