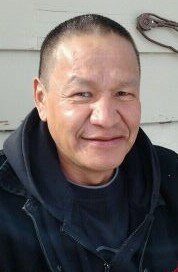 It is with great sadness that we announce the passing of Eric Redcalf of Red Deer, Alberta on October 27, 2021, at the age of 58 years.

Eric was born in Rocky Mountain House, Alberta in 1963. His full name at that time was Eric Redcalf, but he later added a middle name of Darcy. He was the sixth of nine children and lived on the reserve with his mother Charlotte and his father Shorty.

Eric got his driver’s license at a young age. Since he was one of the only members of his family with a license, he got invited everywhere. Driving offered a freedom that helped him overcome much of his youthful shyness.

Eric lived on the reserve until he was 18, then moved to Edmonton. In 1985 he had a daughter named Natasha Gouda. Natasha tragically passed away in 2017, leaving behind two children, Eric’s grandchildren, Somora and Nicholas, who are being loved and cared for by their maternal grandmother (kokum), Rita Gouda of Edmonton.

In the early 2000s, Eric went back to school to complete his grade 12 equivalency. He was very excited to become a high school graduate; it was one of his proudest moments. From that time on, he enjoyed taking more courses and spent many hours reading about history, especially that of the Canadian Indigenous people. Eric did some construction work in Edmonton before moving to Red Deer in 2008.

Eric loved playing crib, and was quite good at it. He enjoyed playing hockey when he was younger and watching the game as an adult. He watched mostly sports and animal shows on TV, but also like the occasional game show. He was never far away from a source of music, as he loved listening to ’80s and ’90's rock and roll. He had a special affinity for Elvis, as he reminded him of his older brother, Roger, whom they nicknamed Elvis. Eric’s nicknames included Eric the Red and Mr. Red.

Eric loved his family and friends and would do anything for them – or anyone else. He was grateful to get a cell phone because it allowed him to stay in touch with loved ones far away. He was a peacemaker who tried to help everyone around him feel good and at home. He never had a bad word about anyone and believed in Almighty God. He also loved animals and nature; animals seems drawn to his loving spirit.

Eric was a kind-hearted soul who loved to help the disadvantaged, never judging anyone for any choices they made. He understood the impoverished, as he had gone through scarcity when he was young. He welcomed having his family come to him for advice or reassurance, as he felt joy at being able to help them. He came up with plans to help his family make it through their own pain and become more self-assured and healthy.

Eric had a smile for everyone. He had a quiet laugh and soft nature, but when something was funny to him, you couldn’t mistake the huge smile on his face and the quiet shaking as he chuckled inwardly.

Eric leaves behind a loving wife, Patti Lambert; grandchildren Somora and Nicholas Gouda; brothers George, Louis and Ivan; and numerous nephews and nieces. Eric was predeceased by his father Shorty and his mother Charlotte, and his siblings Alan, Roger, Raymond, James and Janet, and his daughter Natasha.

A Celebration of Life will be held at Potter’s Hands Ministries Church, 5202 53 Ave, Red Deer AB, on Thursday, November 18 at 2 pm.

Condolences for Eric's family may me emailed to meaningful@telus.net.

Share Your Memory of
Eric
Upload Your Memory View All Memories
Be the first to upload a memory!
Share A Memory