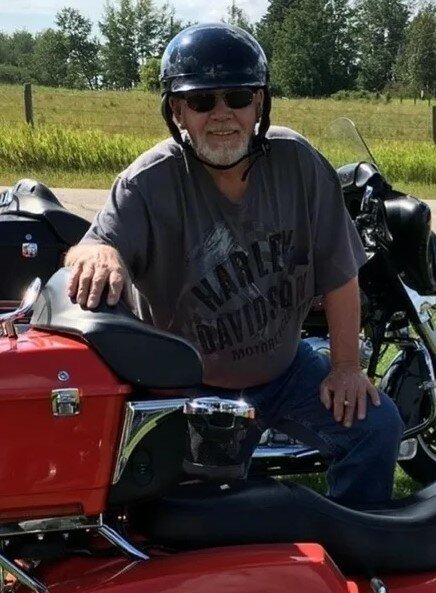 It's not goodbye, it's see you later.

It is with deep sadness that we announce the passing of our husband, father, grandfather, brother and son Robert J. (Jim) Wyatt on January 12, 2022.

Jim was born and raised in Burlington,Ontario. He moved west to Alberta in 1973 to join the RCMP and served for 25 years. Soon after arriving in Alberta, he met and married the love of his life, Debbie (Dekeyser) at Drumheller and they were married in 1976.

Jim’s career with the RCMP took him to Strathmore, Drumheller, Elk Point, Didsbury and Ponoka. Jim and Debbie enjoyed travelling to the East Kootenays of BC on their Harley with their son Bobby and friends, and they made many memorable trips to Arizona and California for winter getaways. Jim and Debbie spent most of their summers at their lake lot in Sylvan Lake for 15 years, where they met many good friends.

Retirement from the RCMP didn’t last long, and Jim became the Safety Supervisor for Prairie Bus Lines, where he would work until his second retirement in 2020.

Jim’s true enjoyment came from spending time with his children and especially his grandchildren, Damen, Keith, Sophie and Josh, spending many days at the beach, riding around on the old golf cart, and playing games around the fire pit.

Jim was predeceased by his father Bob, his brother-in-law Steve and his father-in law-Fritz. He is survived by his mother Marg, his wife Debbie, his daughter Amie (Andrew), his son Bobby (Shannon), his sisters Deb (Steve), Patti (Gary) and Boo (Jeff), his brother-in-law Derek (Kathy, Kim), many nieces and nephews, and his grandkids Damen, Sophie, Keith and Josh, whom he adored and was so very proud of.

Jim passed away with family surrounding him with love. There will be no service at Jim’s request.

Family wishes to extend a special thank-you to Dr. Ford and his team, the staff at the Red Deer Hospice, and Dr. Hackett and Unit 32 at Red Deer Regional Hospital for their care and compassion.

Condolences for Jim's family may be emailed to meaningful@telus.net.

Share Your Memory of
Robert J. (Jim)
Upload Your Memory View All Memories
Be the first to upload a memory!
Share A Memory