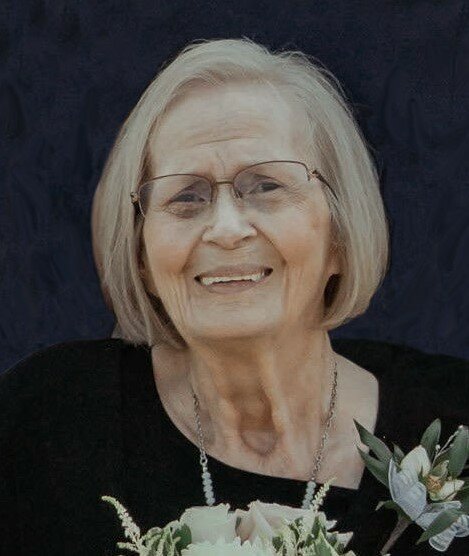 It is with profound sadness that we announce the passing of Deloris Patricia Dye (Youngstrom). Our loving and devoted mother, grandmother and friend, left her sojourn on earth surrounded by her five loving daughters at the Red Deer Regional Hospital on Monday, January 17, 2022 at the age of 83.

Deloris (Dodi) was born in July 1938 in Innisfail, Alberta to John Ralph Youngstrom and Alice Lucille Raymond. She was raised on the family farm near Markerville with her two older sisters, Pearl and Doreen. Deloris married the love of her life, Robert George Dye, on August 31, 1957 in Markerville, Alberta. They joined The Church of Jesus Christ of Latter-Day Saints in 1964 and were sealed in the Cardston Alberta Temple. The couple shared 48 wonderful years together.

Deloris lived a full life as a devoted wife, mother, grandmother, sister and friend. She was gracious and nurturing, loved to garden, tinker, craft and sew. She was a marvelous cook and had a witty sense of humour. All who knew Deloris were familiar with her brilliance and ability to accomplish anything she set her mind to. She pursued many careers and interests, including working at Gaetz-Cornett Drug Store (a time she spoke fondly of), was highly skilled in calligraphy (becoming a member of the Lettering Arts Guild of Red Deer) and was a gifted graphic artist (working for MacLean Granite, where she designed and hand-engraved headstones throughout Alberta). She attended the University of Alberta and received her hemodialysis training. Training she used to treat patients in their home.

Most of all Deloris loved her family and instilled good values in her children and grandchildren that serve them well. She will be dearly missed by her five daughters Lorraine (Alan) Poytress, Jo-Anne (Tim) Campbell, Carmen (Geary) Howe, Heather (Darren) Miller, Jennifer (Gary) Motley, 32 grandchildren and 40 great-grandchildren, as well as numerous relatives and dear friends.

Deloris is survived by her sister-in-law and life-long friend, Shirley Dye. She is predeceased by her husband, Robert, her parents, her sisters and brothers-in-law, Pearl (Roger) Nelson and Doreen (Fred) Fisher, son-in-law, Bruce Hallman, 2 grandchildren and 4 great-grandchildren. Let the heavens rejoice at their eternal reunion.

A private family service will be held. Interment will follow at the Alto Reste Cemetery, Red Deer, Alberta.

If desired, memorial donations may be made to the University of Alberta: giving@ualberta.ca or 780-492-7587.

Share Your Memory of
Deloris Patricia
Upload Your Memory View All Memories
Be the first to upload a memory!
Share A Memory