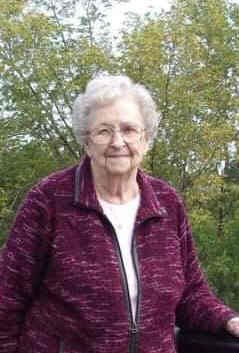 It is with great sadness we announce the passing of Ingibjorg “Grace” Egilsson on February 4, 2022 at the age of 96 years.

Grace was born on a farm in Logberg, Saskatchewan in 1925, the first born to Peter and Sveinbjorg Anderson. She was raised with five siblings (Fred, John, Irene, Linda and Carol) in MacNutt, Saskatchewan.

After completing high school in 1943, Grace worked as her father’s assistant in the MacNutt post office. In 1945, she began working in the office of the MacNutt Creamery. She continued there until she married the love of her life, Jon Egilsson, in August of 1947.

Together they raised a family of four boys, Allan, Theodore, Grant and David.

Grace was well liked and respected by all who knew her. She was aptly named as she always conducted herself with grace and dignity. Grace acted as the matriarch for both the Egilsson and Anderson families. All of Grace’s nieces and nephews recall fond memories of the time they spent with her on the family farm in Calder, Saskatchewan. She also lived for a time in Calgary, Alberta and owned and operated a convenience store with her sister Irene in Langley, British Columbia.

Grace and Jon moved to Red Deer, Alberta in 1979 to be closer to her children and grandchildren whom she counted as her greatest blessing.

After her husband Jon passed in 1991, Grace filled her time with volunteer work, traveling and of course spending time with family and friends. Grace’s family remained her greatest joy until her passing.

She was predeceased by her husband Jon; parents Peter and Sveinbjorg; brothers Fred and John Anderson and sister Irene Olson.

A celebration of life will be held for Grace at a later date to be announced. Memorial donation may be made to the charity of the donor’s choice.

Condolences to Grace’s family may be emailed to meaningful@telus.net.

Share Your Memory of
Ingibjorg
Upload Your Memory View All Memories
Be the first to upload a memory!
Share A Memory