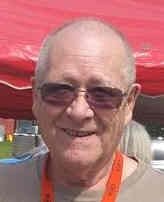 Donald Carl Gustafson of Lacombe AB, passed away on February 20, 2022 at the Red Deer Hospice at the age of 74 years after a two year battle against numerous health issues.

Don was born on July 27, 1947 in Beaverlodge and grew up in Grande Prairie. In his late teens he was usually on stage on Friday and Saturday nights where he played the keyboard (most notably with the Esquires). He was fun-loving but also a notorious “scrapper”. In these last few years, he was very proud of being an honorary Cajun on Facebook.

When he worked for the Easy-Off company in Edmonton, he had the distinction of being the 2nd highest rep in Canada. After Easy-Off, he spent 20 years delivering products at night to Earl's & Wendy's.

Don is survived by Barbara Watson, his beloved partner, caregiver, and teenage sweetheart with whom he reunited in 2015 as well as his step-son Tosh (Miha). He also leaves behind his brother, Larry (Lorraine); his sister, Agnes (Richard); his estranged wife, Ozanne, his daughter Clarissa, his son Larry, and three grandchildren. Too numerable to mention are his aunts, uncles, nieces, nephews, cousins, and a host of long-time friends.

He was predeceased by his parents, Gunnar and Alice (nee Hunter) Gustafson who were both WWII veterans and by his sister Marilyn Norton.

In following with Don’s wishes, no service is planned. In lieu of flowers, please do something nice for someone else.  Condolences to Don’s family may be emailed to meaningful@telus.net.