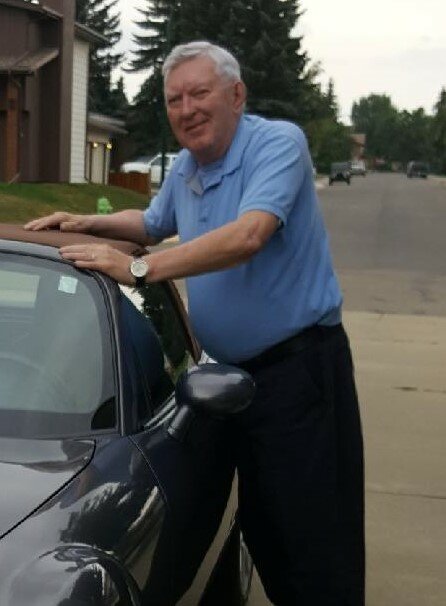 Robert Lawrence Davis was introduced to the world by his parents, Laurence and Jean Davis.

A day in the life of Robert (Bob) Davis as a young man was filled with exercise as a sergeant in the military, a father to his three children, and a loving and sometimes maddening role as a husband. Robert had a long career in the military; serving for 23 years. He met lifelong friends, went to Cypress as a UN peacekeeper, and traveled throughout Europe, and was stationed in Germany while serving in the Canadian military. He was a long-standing member of the Masonic Lodge and the Royal Canadian Legion.

Robert met the love of his life, Karen Elizabeth Oliver, and made an honest woman out of her April 22, 1963. The rabbit died the following year and his family began to grow; first came son Robert Patrick, then daughter Darcie Ann, and to complete this little family, son Blain Gordon. Bob and his family settled in Calgary, where he continued his military career, coached for his children’s sports teams, and enjoyed tinkering in his man cave.

Robert’s life significantly changed when he was told by his three children that despite the fact he had never changed their diapers, he may have to change his grandchildren’s. Robert and Brenda had three children: Justin Robert, Matthew Evan, and Amanda Rae. Darcie had two children: Conner Braeden and Rylun Jarod, and now shares her life with Clayton. Blain and Kristin had two children: Evan Keiffer and Jack Liam. The miracle of miracles for Bob was that he never did have to change any diapers in his lifetime. Bob had extreme pride in all of his grandchildren and loved them all so very much!

Bob and Karen moved quite a bit in their lifetime. They were in Victoria, Edmonton, Germany, Calgary, Crossfield, Didsbury and finally Red Deer. It was okay, though, because they had lots of help with children and grandchildren called to active moving duty. Bob’s favourite memories and places to be were Europe (Germany) and Didsbury on the acreage driving around on his restored tractor. The final move to Red Deer, for Bob and Karen, was a way to be right smack dab in the middle of all the children and grandchildren. This home was the meeting place for family gatherings and special occasions in which Bob would turn off his hearing aids and just nod and smile at the family.

With that said, he was genuine to a fault. If he liked you, you knew it and if he didn’t… well, you usually stayed away. He was a teddy bear at heart, though; he could not get through sappy commercials or a war movie without blubbering like a baby. He loved his family and friends and was fiercely protective.

Robert Lawrence Davis passed away on February 26, 2022 at 9:30 in the morning after a second battle with cancer. He knew what he wanted and that was to die at home surrounded by his beloved wife and his three children. He was able to see all of his grandchildren before he passed and was so happy he could see them one last time. Bob slipped into his next life knowing he was loved and with the people he loved, as well as his rescue puppy Henry. It was a beautiful passing.

Bob was never one for a funeral service, so everyone who remembers him is asked to celebrate Bob’s life in their own way; spend a moment on a memory, raise a glass of their favourite drink, or a donation to the cancer society in his memory.

Share Your Memory of
Robert Lawrence
Upload Your Memory View All Memories
Be the first to upload a memory!
Share A Memory