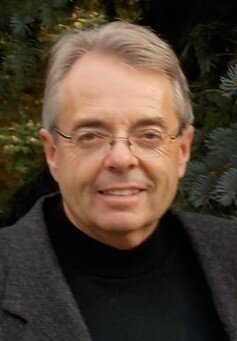 Richard Cecil (Rick) Grove of Red Deer Alberta passed away at the Red Deer Regional Hospital Centre on Monday, March 21, 2022 at the age of 66 years.

Rick was born in May 1955 in Red Deer, Alberta, to Cecil and Ivy Grove. Rick attended school in Red Deer and completed high school at Lindsay Thurber, graduating in 1973. He went on to earn a zoology degree from the University of Alberta in 1977. Rick and his close friend Peter Wyntjes embarked on a two-month adventure to New Zealand and the Cooks Islands, and there was much enthusiasm, for many years, talking about this trip and sharing slides.

Rick was a hardworking family man who enjoyed a variety of hobbies – hunting and fishing, hiking, and he was a talented artist – painting many landscape, mountain and nature scenes. He and his dad loved fishing, and tackled many streams together, went on many hunting adventures, and later he shared these passions with his children. During his children’s earlier years, Rick operated a hobby farm with his first wife Betty-Jane, near Bentley (all the while working full-time in Red Deer), where goats, buffalo, and rheas made up part of the unique menagerie of animals he took interest in. Rick’s children describe him as a great dad who enjoyed having fun and laughs with them, playing football, basketball and other games on the farm. The many pizza and steak nights, playing frisbee golf, as well as many other fun activities are missed and fondly remembered.

Twenty-eight years of dedication to Atco Gas led to Rick’s retirement in 2014. He fulfilled a variety of roles there over the years, preferring outdoor tasks to time behind a desk – he was a man who demonstrated an excellent work ethic, high standards and an ability to teach and train, most recently in his role as a gas line locator.

Since the late '90s, Rick was blessed with a new passion – a love for his savior Jesus. Nothing meant more to him and he wanted everyone to know about this life-changing experience. Rick became involved in Bible studies (leading for the past several years), teaching Divorce Care classes and serving as a Deacon at Living Stones Church, and participating in plays, ushering, church grounds clean-up, you name it. He was a servant. His faith was further strengthened through a variety of health challenges, most recently a diagnosis of early onset Alzheimer’s just over four years ago. Rick faced this final obstacle with courage and acceptance, and was always appreciative of the help he was given due to his declining abilities.

Rick was predeceased by his parents Cecil and Ivy, a son, Josh, and three aunts, Margaret, Marion and Louise. He is survived by his wife Karen; his children Jesse (Jen) and their children Indra and Isaiah; Amber-Jane (Jeff Sheplawy) and their children Edric, Darien and Calia; and Cole and his wife Brianna; and his sister Linda Allan, her husband Don and their daughters Amanda and Leigh-Ann and their families. Rick is also fondly remembered by Karen’s children, Chris, Heather, Stephanie and Scott Gooding, and extended family. He will be missed by many other relatives, friends and acquaintances who were blessed to know him.

A special thank-you goes out to Dr. Taiwo and her team, and the many other doctors, nurses, and  Red Deer hospital staff who showed endless kindness and compassion to Rick during his four-month hospital stay.

A Celebration of Life will be held at Living Stones Church, 2020 - 40 Ave, Red Deer AB, on Monday, April 4, 2022 at 1:00 pm. Light refreshments will follow. The service will also be live streamed on the church’s website at Livingstones.ab.ca.

Condolences for Rick’s family may be emailed to meaningful@telus.net.

Share Your Memory of
Richard Cecil (Rick)
Upload Your Memory View All Memories
Be the first to upload a memory!
Share A Memory