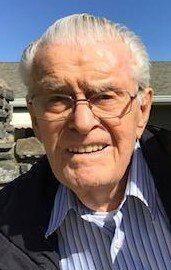 Edgar James Martens of Red Deer, Alberta passed away at Points West Living on March 10, 2022 at the age of 100 years.

He was born in August 1921, along with twin brother Arthur, to Abram and Susanna (Schellenberg) Martens in Main Centre, Saskatchewan. Their grandfathers started the Main Centre Church and the Herbert Mennonite Church. This influenced the young boys greatly. By the time they were 11, the family of nine children lost their mother to cancer. Soon after, their father remarried and three more siblings were born.

Ed gave his life to the Lord in the late 1930s and soon after enrolled at Briercrest Bible Institute. He had a heart for ministry and a passion for missions overseas, and found a kindred spirit in Ruth Fenske. Following Bible School graduation, he wanted to serve his country as a non-combat soldier, requesting medical training that could someday be used on the mission field. His training request was denied, but he served at different stations around Canada before being released for a “farm leave” – to marry Ruth Fenske on April 20, 1945. The couple served at a few different churches before becoming missionaries with the Evangelical Alliance Mission. Ed and Ruth began work in Aruba in 1951 with Joy, 5, and Jerry, 3. They served mostly in Aruba as well as Bonaire and Curacao for over 20 years, building lifelong relationships, mentoring many and adding two daughters, Jeanette and Jo Anne, to their family.

Edgar was known for his humble heart of compassion. He was skilled in construction and carpentry, and always tried to fix anything broken. Ed and Ruth were teammates for life and service, always striving to bring glory to their Lord and Saviour. They often sang together, and Ed carried that tradition on even after losing Ruth in 2012. He was often reported singing or humming by other residents and staff at The Pines Lodge and Points West. Songs of the enduring love and faithfulness of God.

Edgar was predeceased by his parents, Abram and Susanna, and 10 of his siblings. His loving wife Ruth also welcomed him into his Heavenly Home. They experienced deep grief at the passing of their daughter Jeannette and her husband Stephen Sundberg of Minneapolis. Ed also experienced the death of his son Jerry and his wife Suzie Martens of Abbotsford, BC. Left to mourn are daughters Joy (Ron) Lazenby and Jo Anne (Tedd) Epp of Saskatoon, 12 grandchildren and 31 great-grandchildren. He will also be missed by a large extended family and many friends across the world.

In lieu of flowers, memorial donations may be directed to Briercrest College and Seminary, 510 College Drive, Caronport SK, S0H 0S0 (or online here), or a charity of one's choice.

Condolences for Edgar's family may be emailed to meaningful@telus.net.

Share Your Memory of
Edgar James
Upload Your Memory View All Memories
Be the first to upload a memory!
Share A Memory