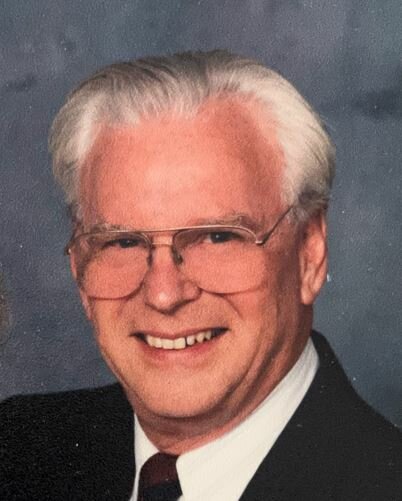 James Edward Gravells of Red Deer passed away peacefully on March 29, 2022 at Red Deer Regional Hospital at the age of 92 years old.

We will miss Ed's sense of humour and his loving concern for his family. He was always willing to help out, with some prodding from Audrey. He always considered that "Britain invented that first" or "things were always better" the way the British did it. He also was quick to save a penny wherever he could.

Ed was born in Grimsby, Lincolnshire, England and immigrated to Canada with his bride Audrey to Red Deer in 1953. Ed had to temporarily take whatever work he could find until he saved enough to start his own denture mechanic business, which operated in Red Deer as Parkland Denture Clinic for nearly 50 years.

Ed was a car enthusiast (a Top Gear fan) and in the early years was involved in Red Deer Rally Club with Audrey being his navigator. They won many awards for their prowess. He and Audrey were also champion ballroom dancers both in England and here in Canada, where they won numerous awards. He was an avid tennis player and devoted fan, hardly ever missed a match on ATP and WTA circuits, and was a long-term member of Red Deer Tennis Club. He played tennis weekly until 2019, and cherished his friendships there. For 30 years, he helped organize and run the Red Deer Badminton Club.

Ed will be deeply missed by family and many friends. He loved Jehovah God, symbolizing his devotion by being baptized in 1989. He really enjoyed going out to talk to people and share his hope in seeing the earth being transformed into a paradise the way Jehovah always intended as outlined in the Bible. Being among his friends and family at the congregation meetings was the highlight of his week; he even learned how to use Zoom so he could continue to attend the meetings and association. His friends enjoyed visiting with him with an interchange of encouraging thoughts and beliefs. He looked forward to the time, which was highlighted in the Bible at Isa, 33:24 that says of a time where no resident will say: "I am sick." It will be a happy day when he and Audrey will once again be together in the paradise on this earth.

In lieu of flowers, memorial donations can be made at www.jw.org.

The family wishes to thank the nurses on units 24 and 32 at Red Deer Regional Hospital and all the doctors and nurses for their loving care over the last two-and-a-half months.

Condolences to the Gravells family may be emailed to meaningful@telus.net.

Share Your Memory of
James Edward
Upload Your Memory View All Memories
Be the first to upload a memory!
Share A Memory