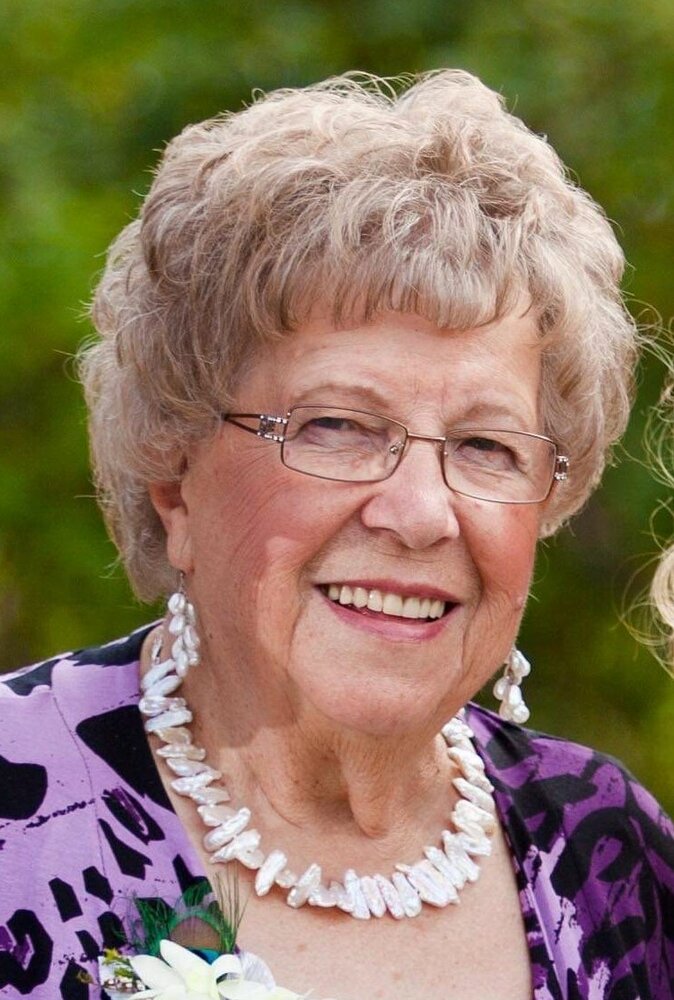 Evie grew up on a farm in the Kuusamo area, attending Kuusamo School and Benalto School before heading to Sylvan Lake for grade 11. In 1951 Evie attended the Composite High School in Red Deer for grade 12 where she studied bookkeeping, typing and office studies. She enjoyed living in the dormitories while attending school in Red Deer, making new friends and fun memories. Evie was keenly interested in the world, loved looking at maps and longed to travel.

Evie married Terry Hambly on November 21, 1952 in Sylvan Lake.  Farm life began sharing the house with Gertrude and Ralph. This arrangement continued until the early 60’s until Ralph build on the NE quarter of 17. Evie was the driving force to clean up the yard. During the early years of their marriage they tried almost every type of livestock, turkeys, sheep, pigs, horses, and cows. Evie would separate the cream to sell to the creamery in Sylvan Lake for grocery money and treat the kids to ice cream. After Ralph and Getrude moved, the farm operation was mostly cows and horses. Evie loved to work outside. She had a large garden, helped in the PMU barn, drove the grain truck in the fall, and of course continued to improve and make her yard her pride and joy.

Community was important to Evie, in particular her work with the Evarts Community Club, and helping with the 4H Sewing Club. She was also an avid member of the Benalto Curling Club for many years. She belonged to the Benalto Agricultural Society and took on organizing the Horse Show. As her family grew, Evie enjoyed taking Gail and Shauna to high school rodeos, getting away from the daily grind of the farm to have a little fun! Evie’s love of rodeo continued throughout her life as she always made her way to the Ponoka Pro Rodeo and Canadian National Finals. Evie was a longtime bowler and always enjoyed participating in ladies leagues in Sylvan Lake. Evie and Terry were longtime season ticket holders for the Red Deer Rebels, and a proud fan of the Edmonton Oilers!

Evie was committed to her family, friends, and farming. Never one to shy away from hard work; if a job needed to be done, it was done!  Her commitment to family was strong, and there was little stopping her once she decided to help - she was a force! A woman of strong conviction, you always knew where she stood, and what she thought. There were many memories built during her family meals, whether they were around the kitchen table or in the field. Her grandkids particularly remember her cards skills as they would regularly play around that same table, and for the lovely coats and mittens that she sewed for them. Evie was a staple for her family and the community and she will be missed greatly.

In lieu of flowers, memorial donations may be directed to the Benalto Agricultural Society, Box 76, Benalto T0M 0H0, or to the Alzheimer Society at donorserve@alzeimer.ca.

Condolences to Evie’s family may be emailed to meaningful@telus.net.

Share Your Memory of
Evelyn “Evie” Doreen
Upload Your Memory View All Memories
Be the first to upload a memory!
Share A Memory