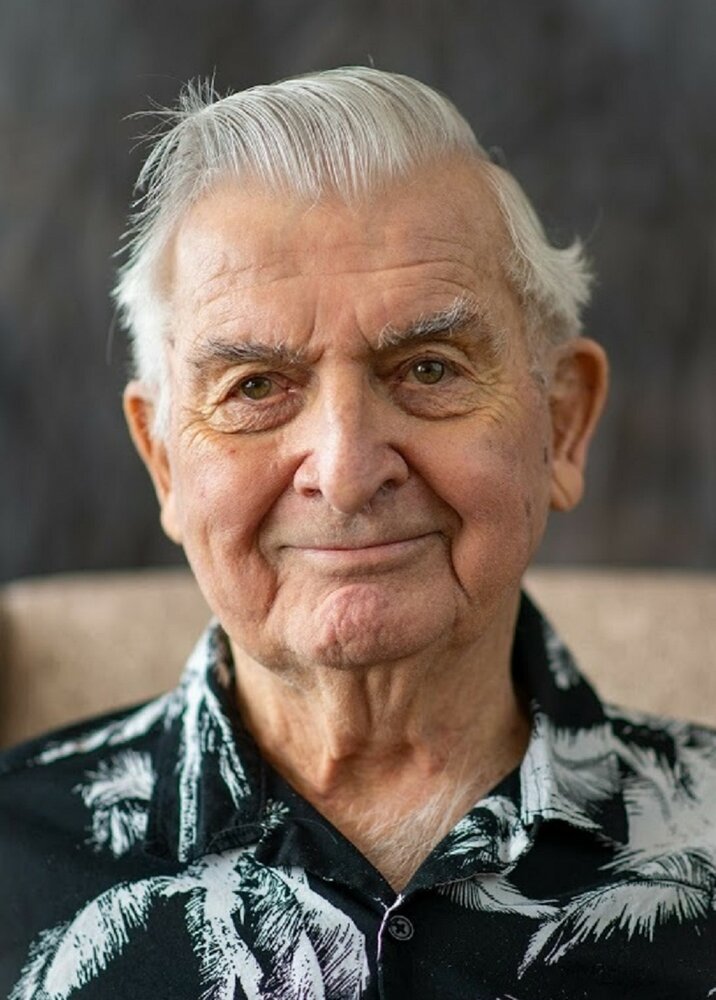 It is with tremendous sadness that our family announces the loss of our father, loving Grandad and dear friend, Don. Don was born in 1929 at Melfort, Saskatchewan and passed away on May 27, 2022, at Red Deer, Alberta. He grew up in Kinistino, Saskatchewan and later moved to Melfort when he was 7.

Don was destined to join his family’s legacy when he showed interest in the family printing business, Lancaster Brothers, established in Melfort in 1908 and eventually known as The Melfort Journal. Don’s grandfather worked as a typesetter at the London Times in the days when the words in the newspapers were set one letter at a time. He went on to experience a lifetime in the printing business in the communities of Melfort, Stettler, Alberta and eventually Red Deer until retirement at age 65.

Not ready to fully retire, Don decided to venture into the plumbing industry with Bruins Plumbing in Red Deer, at the parts counter for four years. Don gained many lifelong friends throughout his careers.

Don’s younger years were spent participating in hockey, curling and golf. He was a Boy Scout, an Air cadet and also served for six years in the Army Reserves in Melfort. He was a Lieutenant with the Melfort Volunteer Fire Department for many years, eventually receiving an honorary Lifetime certificate.

He was a man of nature, having met the famous Grey Owl in Northern Saskatchewan when he was only 12 years old. He taught his family to fish and hunt and respect the land. He especially enjoyed spending time fishing with his grandchildren. As an avid hunter, he had countless hunting trips with many good friends over the decades, gaining countless stories to share in his later years.

When Don decided it was time to settle down, he knew that there were some pretty nurses at the local hospital, and what better way to find himself a gal than to meet one at the nurse’s residence. That is where he found the love of his life, Joyce, and they were married November 15, 1952. This November they would have been celebrating their 70th wedding anniversary!

Although wintertime was for curling, golf was among his favourite summer activities. One of Don's most memorable achievements was getting a hole in one at the Lacombe Golf and Country Club on July 24, 1989. But his proudest moment was the time his granddaughter won a golf award for having the best attendance. After driving her to every practice and with all his encouragement, he was so proud of that young lady!

Don is survived by his children, Doug (Grettie), and Donna (Freddy); his grandchildren, Jalene (Melissa) and Randy (Cia), and many more dear friends and family.

Don was predeceased by his loving wife, Joyce (Tittemore) who passed away only six days before him; his parents, George and Annie Lancaster (Furminger); and his brother Mervyn (Winona). He was also predeceased by his grandson John, in 2004.

Don spent his last three years of life at Points West Living in Red Deer with Joyce by his side, almost to the end. Don’s natural ability to make friends wherever he went, along with being a great storyteller with a commanding voice, and now with a captive audience, gave him ample opportunity to share his memories with those around him as often as he liked. Our family will never forget the care and kindness from the Care Partners while our parents were in their care during those years.

Don will be fondly remembered by those who loved him dearly and those who knew him as an accepting, trusted and loyal friend.

A celebration of life will be held for both Don and Joyce at a date to be determined later by the family. In lieu of other tributes, memorial donations can be made to the Salvation Army, Don’s most favoured charity.

Condolences for Don's family may be emailed to meaningful@telus.net.

Share Your Memory of
Albert Donald “Don”
Upload Your Memory View All Memories
Be the first to upload a memory!
Share A Memory