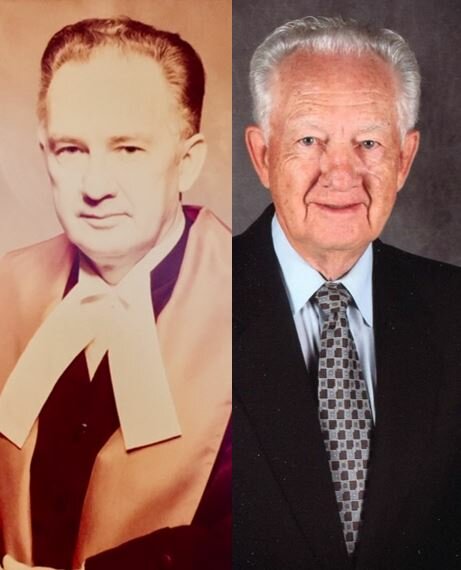 RETIRED JUSTICE OF THE COURT OF QUEEN’S BENCH OF ALBERTA

It is with great sadness that the family of Jack Kenneth Holmes announce his passing on June 14, 2022.

“Papa” is survived by his five children and their spouses, John (Kathy), Marni (Dale), Don (Diane), Gordon (Trish) and Doug (Christina); and his many grandchildren and great grandchildren. Jack is predeceased by his wife, Jean in 2008, as well as his siblings, Don, Glen (Casey), and Doris.

Born in Ponoka, Alberta on January 2, 1928, to Robert and Emily Holmes, Jack moved to Red Deer in 1943. He obtained his Bachelor of Arts and his Bachelor of Laws degrees from the University of Alberta, and articled to the Hon. William McGillivray QC, who later became the Chief Justice of Alberta. He founded the firm of Robinson & Holmes (now Johnston, Ming, Manning) in 1953.

A strong public service ethic prompted him to serve on many boards and committees. In 1979, he became the first federally appointed Justice to reside in Red Deer and went on to serve as a judge for 27 years. He was then appointed to the Canadian Pension Appeals Board, where he adjudicated hearings across Canada, until he retired at 85.

Jack would want us to express his great appreciation to all his former colleagues on the various courts of Alberta, and particularly all the unsung administrative staff who made his career so long and enjoyable.

Papa’s spare time was occupied with family, travel, golf, skiing, reading, and friends. He never lost an opportunity to boast about his grandchildren, and always enjoyed taking them to a hockey game.

There will be a private interment and celebration of Jack’s life.

Condolences for Jack's family may be emailed to meaningful@telus.net.

Share Your Memory of
Jack Kenneth
Upload Your Memory View All Memories
Be the first to upload a memory!
Share A Memory