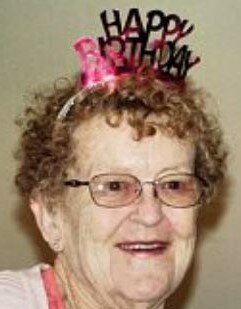 Margaret Bostock passed away on Monday, June 13, 2022 at the age of 86 years in her home at Sunset Manor in Innisfail. She was the third child of Bill and Annie Aldred. Born in 1936 in Crossfield, Alberta, she had all her schooling in Crossfield. She belonged to the 4H Garden Club, Sewing Club and Calf Club. She was a member of CGIT (Canadian Girls in Training). She enjoyed entering embroidery and sock-mending exhibits at the Olds Fair.

She had five brothers: Edward, Charlie, Glen, Ray and Neville, and two sisters: Bernice and Norma Jean. As a child, she always enjoyed playing ball, spending many summer hours with a bat and ball glove. In winter, she really liked to play Fox and Goose. As they got older, the girls did cooking, ironing, sewing, cleaning, etc. for the neighbours. Years later, she enjoyed the reminiscing and fun that happened when she and her brothers and sisters and their partners all got together to celebrate one of their birthdays.

She moved into Crossfield to work. There she met and married John Bostock of Saskatchewan on May 6, 1955. They had two daughters, Shirley and Charlotte. John had jobs in several communities: Acme, Airdrie and the Calgary area.

The family moved to Airdrie in 1961. She was there for 21 years. She belonged to a number of volunteer groups, one of which was the Women’s Institute. She also belonged to the U.F.W.A. (United Farm Women of Alberta) and enjoyed going to every meeting with her mom. She was a 4-H Garden Club leader during the time her girls were members. In 1980, she received an award from the town of Airdrie for her volunteer work in the town.

In 1981, she moved to Innisfail, Alberta. Over the years, she had several jobs, including owning her own hobby shop in Airdrie. She worked for Kentucky Fried Chicken in Airdrie and at the Country Lodge in Innisfail. She was a camp cook for the County of Red Deer and a cook at the Canadian Forces Base in Penhold. She did sewing for others for a number of years.

She retired in 1997. Her favorite pastime was working out in her yard. She would get up early and head out to her yard and keep working until it got too hot to continue. Then she returned outside after it cooled down and worked until it got dark. She loved trying new types of plants. She had a water feature and also several birdhouses. She enjoyed watching the different varieties of birds that visited her yard. She included several different solar lights in her garden, so she could get pleasure from her yard at night, as well as by day.

She also liked making quilts and doing a lot of different crafts. She had painted, wallpapered and remodeled her home several times, too. Caring for her many houseplants was a joy, especially when there were colorful blooms.

She is survived by her daughters, Shirley and Charlotte, grandchildren Scott (Maria), Blane, Diane (Chris), Jared (Danielle), Annie (Justin) and Derek, as well as her great-grandchildren.

She was predeceased by her parents, Bill and Annie Aldred, her son-in-law, Dale Langevin, four brothers and one sister and several in-laws.

As per Margaret’s wishes, there will be no funeral.

Condolences for Margaret's family may be emailed to meaningful@telus.net.

Share Your Memory of
Margaret
Upload Your Memory View All Memories
Be the first to upload a memory!
Share A Memory