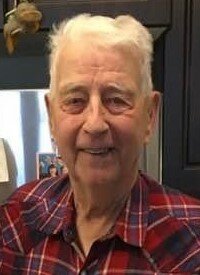 Arie Cornelis Valstar of Rocky Mountain House passed away at the Red Deer Hospice on August 20, 2022, at the age of 85 years.

Arie was born in March of 1937 in Hillegersberg, Holland. Arie, along with his family, immigrated to Canada in 1949 to the Castor area. Arie and his family moved to Rocky Mountain House, Alberta, where they grew up.

Arie worked in the oilfield and eventually moved to High Level, Alberta, where he started his Valstar Trucking business and also had a homestead. Once he retired and moved back to Rocky Mountain House, he started a hobby farm in Condor, where he had cattle; you could find him there every day. He also loved hunting, fishing and camping with his family.

If you so choose, memorial donations may be made in Arie’s memory to donor’s choice or Red Deer Hospice Society, 99 Arnot Avenue, Red Deer, Alberta, T4R 3S6.

Condolences to Arie’s family may be emailed to meaningful@telus.net. Please put “Valstar” in the subject line.

Share Your Memory of
Arie Cornelis
Upload Your Memory View All Memories
Be the first to upload a memory!
Share A Memory