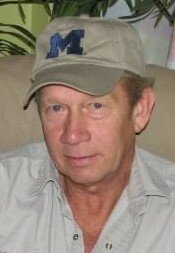 Kenneth Michael “Mike” Gordon of Red Deer, Alberta passed away on September 13, 2022 at the age of 67 years.

Dad was born in Chatham, Ontario. He then moved to the United States in 1964.

Dad left school at a young age to pipeline with his Dad. He was a dedicated, hard worker his whole career. He was incredibly proud to work on the Alaska Pipeline, which covers over 800 miles, from 1975 to 1977. He had many different roles on the pipeline over the years -- from being a straw boss, pipefitting, spacing, welding, sandblasting, running equipment... and more.

In 1997, when we moved to Alberta, Dad transferred unions from Tulsa Oklahoma’s 798 to Edmonton’s 488. While pipelining, he made many friends all over North America and he made a point to keep in touch with them -- keeping their contacts in his well-known black book.

In his spare time, Dad loved to fish. Although, he would have preferred to fish in the beautiful water in and around Michigan, the rivers and lakes in central Alberta made do.

Dad had a well-known look of Wrangler jeans and a button-up shirt, complete with a cowboy hat and boots. His striking blue eyes tied it all together.

Condolences for the family may be emailed to meaningful@telus.net. Please include "Mike Gordon" in the subject line.

Share Your Memory of
Kenneth Michael "Mike"
Upload Your Memory View All Memories
Be the first to upload a memory!
Share A Memory