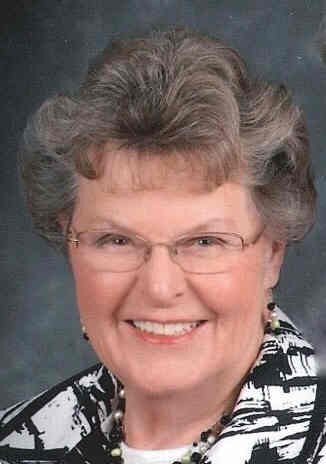 Patricia Susan (Weatherill) Young passed away peacefully and surrounded by family on October 28, 2022 after suffering a stroke.

Born in 1937 in Lacombe, AB, the world would forever be that much more organized. Pat grew up on the family farm in Tees, AB with her younger sister Barb and completed school in Lacombe before going to Teachers College at the University of Alberta. She would teach at Bentley and Riverglen (Red Deer) before opening her own Kindergarten in 1966.

A handsome young man by the name of George Young would eventually catch her eye at a country dance and they would spend 63 years together. Pat and George would bring two children into the world, Deb and Greg, to complete their family.

For years, summers were reserved for camping with the family and friends, whereas winters were for bowling.  Volunteering for various organizations and events was a year round event; over the years, she would be a key volunteer for the Westerner Park Parade Committee, Delta Kappa Gamma, Westpark Community Association, Gaetz Memorial United Church, Red Deer Bridge Club and the ATA.

Her passions in life included family, teaching, sports, bridge and organizing. Organizing family gatherings may have been her favorite activity; delegating tasks, baking goodies for a small army, and making sure every small detail was taken care of. She could always be found in the stands or on the sidelines cheering on one of her four grandchildren and later, her great grandchildren. Whether you were in her classroom or not, most likely encountered her famous lesson: “If the job is worth doing, it is worth doing well”.

Pat will be immeasurably missed by her husband George, daughter Deb (Dwayne) Beck, son Greg (Lesley) Young, grandchildren Devon (Jenna) Beck, Breanna Beck, Griffin Young, and Aislinn Young and great grandchildren Jake and Cade Beck. She was the matriarch of the family (both blood and adopted) and made an impact on all who met her including numerous nieces, nephews, cousins and in-laws.

She was predeceased by her mom and dad, Betty and Basil Weatherill, her infant sister Catherine, her sister Barb, in-laws Edith and Orlie Young, sister in law Marilyn Young and nephew Dylan Young. A Celebration of Life will be held at 1pm on Saturday, November 5, 2022 at Gaetz Memorial United Church, 4758 50 Street, Red Deer, AB. In lieu of flowers, donations can be made in Pat’s name to the Red Deer Hospice and Alberta Heart and Stroke.

Condolences to Patricia’s family may be emailed to meaningful@telus.net. Please indicate “Young” in the subject line.

Share Your Memory of
Patricia
Upload Your Memory View All Memories
Be the first to upload a memory!
Share A Memory