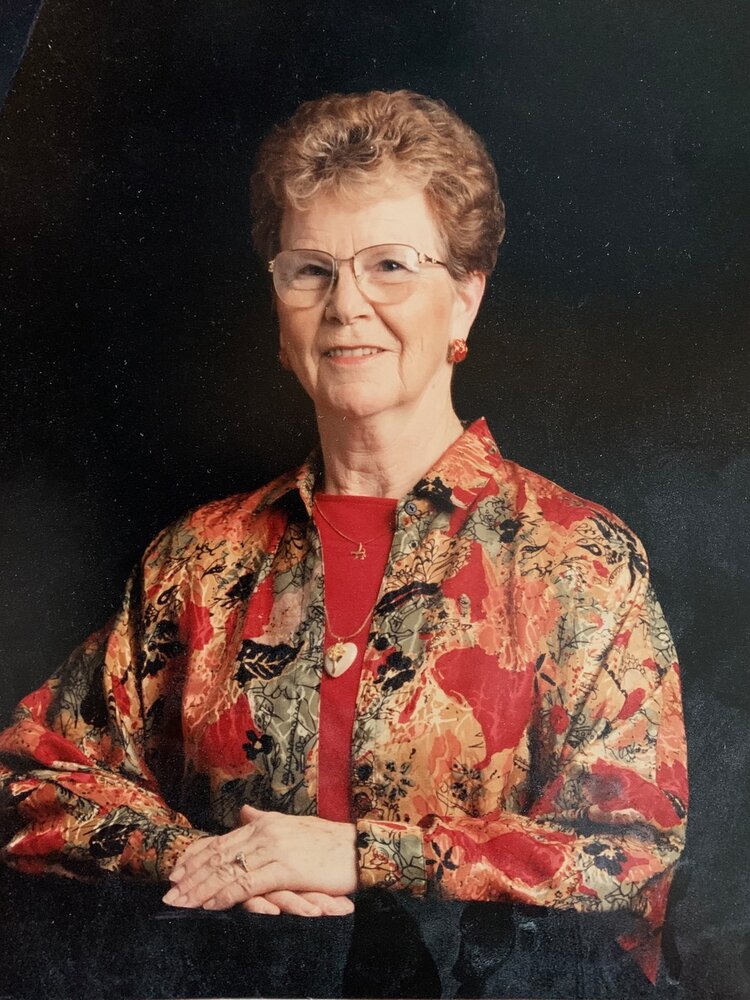 It is with great sadness that the family of Stella Wesley-Bolton announce her peaceful passing on December 5, 2022 at the age of 91 years. Stella was an incredible mother to her five children, grandmother to fifteen children, thirteen great grandchildren and seven great-great grandchildren.

She will be lovingly remembered by her two daughters and three sons. Marilyn (Ben), Carmen (Mike), Brent (Coleen), Blake (Beth) (Kellie) and Glen (Barb). She was predeceased by her parents, Leo and Geraldine Benson, as well eight brothers and two sisters. Stella was the last lone survivor of the Benson family raised by Leo and Geraldine on the family farm and homestead which was located west of Rimbey and centered between the Last West and Leedale rural communities.

Our mother was born on June 7, 1931 on the Benson family farm during the Great Depression. Stella married James Wesley on December 4, 1954 – a marriage that would span 41 years. Together, Jim and Stella Wesley raised their five children on West Park Crescent. Stella was an active member of Trinity Lutheran Church. She was deeply involved with the choir and altar guild. A strong Norwegian to the core, she devoted her life to raising her children as a faith based Lutheran family. As a mother with red hair and a temperament to match -she instilled a strong work ethic and had high expectations for each of the children. She was an incredible cook and baker, avid gardener and especially enjoyed playing cards. Dancing and camping were her other passions. She zealously supported each of her son’s hockey endeavors while working part-time as a rural delivery person for the Red Deer Advocate for twelve years and later on as a food service worker for eight years at the Red Deer College cafeteria.

Sadly, Stella lost Jim on June 20, 1995, as Jim succumbed to ALS. Life provided her with a second opportunity to deeply love a companion when she married Charlie Bolton of Rocky Mountain House on November 27, 2004. Charlie’s daughters, Catherine, Julie, Nola, Kim, Rhonda and a son, Charles, warmly welcomed Stella and the rest of the Wesley clan into their close knit family.

Unfortunately, due to a series of debilitating strokes and deteriorating health, herself and Charlie ended up being forced to reside in two separate long term care facilities in Red Deer and Rocky. Despite the physical challenges, they were deeply devoted to one another. Charlie passed away in the fall of 2016, leaving Stella and the Bolton family to grieve the loss of a very kind and gentle man.

Her grandchildren will truly miss her teddy bear buns and ginger snap cookies. Despite being confined to a wheelchair, Stella lived each day filled with grace, optimism and humility. She had an intense love for family. The last few years were spent at Bethany Collegeside, near the RDC Campus, where wonderful staff cared for her. As a Bethany resident Stella was blessed with many frequent social outings to the Legion, the Casino and Bower Mall to update her wardrobe. She truly enjoyed the strolls around the West Park neighborhood – and was especially fond of the frequent walks to the nearby pond to observe the ducks, geese and wildlife.

Close friends and family will forever hold memories of Stella’s laugh and stories dear in their hearts. A celebration of life will be held at 1:30 pm, June 10 in the Heartland Room at Westerner Park in Red Deer. Our family is extremely grateful to Dr. Odendaal for overseeing Stella over the past few years at Bethany. The compassion, expertise and high quality of care shown by the AHS Care Responders, the ER front line doctors, nurses and staff on Unit 32 at Red Deer Regional was truly amazing.

In lieu of flowers, donations may be made to the Heart and Stroke Foundation of Canada through their website at heartandstroke.ca   Condolences to Stella’s family may be emailed to meaningful@telus.net, please indicate “Wesley-Bolton” in the subject line.

Share Your Memory of
Stella
Upload Your Memory View All Memories
Be the first to upload a memory!
Share A Memory