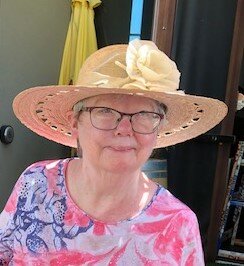 Jeanie was called home early to be with her beloved parents, Bill and Esther Doherty and brother David on December 13th at Crimson Villas in Red Deer at the age of 70. She leaves behind her heartbroken sisters, Sandra Doherty, Hazel Boyd and Pat Doherty. She was born in Westlock, Alberta on August 16th, 1952, she was raised on a farm just miles from town, she attended school there and then worked for many years at the Co-op and the Deli on Main. When she retired, she moved to Red Deer and lived in several different retirement homes. She was known for her happy disposition in life and will be greatly missed by all who knew her. She also leaves her brother-in-law, Wayne Boyd and many nieces and nephews and even some great ones. A service to celebrate Jeanie’s life will be held at a later date in Westlock. In lieu of flowers, memorial donations may be made directly to the Stars Foundation, Box 570, 1441 - Aviation Park NE, Calgary, AB T2E 8M, or through their website at Stars.ca. Condolences to Jeanie’s family may be emailed to meaningful@telus.net, please indicate “Doherty” in the subject line.

Share Your Memory of
Virginia
Upload Your Memory View All Memories
Be the first to upload a memory!
Share A Memory