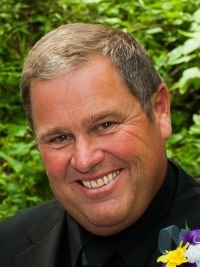 It is with heavy hearts that we announce the passing of Rick Reil at age 59 on October 20, 2019 after his courageous battle with cancer.

Rick was born in Calgary, Alberta in May of 1960 to proud parents Elva and Donavon Reil. He was raised to have a strong work ethic and to be compassionate and kind to others; traits he demonstrated in every facet of his life. During his elementary school years, his family moved to the Crowsnest Pass, where he naturally made his way into the hearts of the community through his sense of humour and dedication to his careers.

In his late teens he started his own DJ business, Nitelite Entertainment, which he continued to operate alongside his other trades bringing joy to all those who appreciated his music. After graduating from Crowsnest Consolidated High School he became a car salesman and then entered real estate, where he met his beloved wife Penny.

Rick further acquired lasting relationships when he began working alongside his father as a contractor. His hardworking nature enabled him to successfully take over the family business, Reil Construction, where he earned the respect of his clients and the community through the high quality of his work and his commitment to ensuring a positive home building experience.

Through his memorable smile and ability to have an engaging conversation with anyone, Rick had an incredible gift for creating lifelong friendships. His many faithful friends could always rely on him for support, humour, and honesty. He loved spending time with friends and family at Lake Koocanusa, where he enjoyed boating, relaxing on the deck and sharing in good laughter. When not at the lake, he enjoyed quadding, watching movies in his famed theatre and cruising in the corvette - a childhood dream come true.

Rick found his greatest happiness in the presence of his family and could always be found beaming with pride, love and support for his children and grandchildren. He will be forever remembered by his beloved wife and soulmate Penny Reil, his children Megan Reil, Teri Lafontaine (Nathan, Ellie), Shaun Reil (Alisha, Jake, Autumn), Robyn Long (David, Nolan, Marlee), and his sister-in-law Karen Reil (Sarah, Matthew). He was predeceased by his parents Don and Elva Reil, and his brother Randy Reil.

In lieu of flowers, donations may be directed to the Tom Baker Cancer Centre (1331 29 ST NW Calgary, AB T2N 4N2) for brain cancer research or to the Crowsnest Pass Health Foundation (Box 455 Blairmore, AB T0K 0E0). Special thanks to the staff at the Crowsnest Pass Hospital for their attentiveness and care through Rick’s journey.

Condolences may be sent to Rick's family by email to meaningful@telus.net. Meaningful Memorials Funeral Service of Red Deer in charge of arrangements. 587-876-4944.

Share Your Memory of
Ricky "Rick"
Upload Your Memory View All Memories
Be the first to upload a memory!