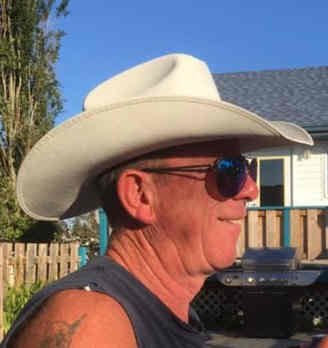 Barry Ernest Thomson passed away just before midnight on May 23, 2020 at the Red Deer Regional Hospital at the age of 64.  He was born in Winnipeg, Manitoba on Aug 18, 1955 to Spike and Yvonne Thomson.  The family left Manitoba in 1966 and moved Carstairs, Ab. where Barry attended school and made lifelong friendships.  He also played hockey for the Carstairs Colts.  Barry started working for Kinch Construction while he was still in High School, cleaning the towers, etc. at the Home Oil Plant just out of town.  That was just the start of his career in the oilpatch.  He never quit a job, but the companies kept getting bought out and changing names.  Hudson Bay Oil and Gas in Cessford, Ab. Then to Dome Petroleum, Amoco Canada, Crestar Energy, Conoco Gulf and Conoco Phillips all around the Eckville area.  He retired from the oilpatch in 2015.  He was looking forward to fishing, golfing and camping.  His favorite camping spots were Open Creek Dam and Dickson Dam.  He enjoyed watching NASCAR and rodeo.  He was so happy to attend the CFR in Edmonton twice and the NFR in Las Vegas once.  He curled in many Eckville Mixed Oilmens Bonspiels and loved the Calgary Flames.  He was also one of the founding members of the legendary Benalto Bullets hockey team, a beer league team that became a close-knit family.  Kris and Barry enjoyed many holidays in Mexico, loving the sand and the sunshine.  Barry had a great sense of humor and always had everyone laughing.  He would imitate Pee Wee Herman, the Grinch, Fog Horn Leg Horn just to name a few.  When Jason and Michelle were young, they would tell everyone that their Dad knew every song on the radio, and he could do a mean Johnny Cash.  Sheldon and Barry would compete on who made the best potato salad - with radishes of course. Barry loved to have family and friends around him. He was so proud of his children and grandchildren.  Kids were drawn to him because he always had the best toys!  Barry is survived by his partner, Kristina Clancy of Eckville, Ab., his children, Jason Thomson and Michelle Thomson (Dave Roberts) all of Medicine Hat, Ab., his step son, Brook Clancy (Chelsea Stanyer) of Sylvan Lake, Ab., his step daughter, Celeste Clancy of Eckville Ab., his mother, Yvonne Thomson of Elora, Ont., his mother in law, Gloria Gillis of Rocky Mountain House, Ab., his siblings, Karen Herle (Tim) of Benalto, Ab., Evan Thomson (Lynn) of Wetaskiwin, Ab., Gery Thomson of Elora, Ont., Colin Thomson (Susanne) of Elora, Ont. and sister in law, Cindy Tippe of Crossfield, Ab. His grandchildren, Merek Siegers, Bryleigh Elgie, Hayven Elgie and Jaylin Thomson all of Medicine Hat, Ab. and Aurora Clancy of Sylvan Lake, Ab. As well as numerous Aunts, Uncles, Nieces and Nephews.  Barry was predeased by his father, Spike Thomson, brother, Sheldon Thomson and brother in law Richard Wood. Barry will be sadly missed by his many family and friends.  A Celebration of Barrys Life is yet to be announced due to COVID-19.  Donation can be made to the Eckville Ambulance Service or to the Heart and Stroke Foundation. Condolences to Barry’s family may be emailed to meaningful@telus.net. Arrangements in care of Meaningful Memorials Funeral Service, Red Deer AB    Serving Red Deer and all of Central Alberta    587-876-4944

Share Your Memory of
Barry
Upload Your Memory View All Memories
Be the first to upload a memory!