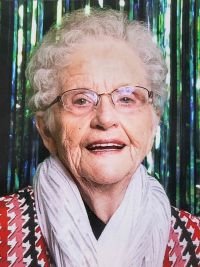 Peggy was born in Major, Saskatchewan to John and Helen Hopkins, the oldest of 9 children. Due to numerous family moves, Peggy attended 8 different schools to obtain a Grade 9 education. Peggy worked hard from an early age to assist with the raising of her siblings. She was married to Glen on November 5, 1947 and together they raised their family on the farm in Springvale. In 1973, they semi-retired, and moved to Vancouver Island spending the next 20 years. They returned to Central Alberta in 1993.

Peggy loved to knit, bake buns and pies, cook meals for anyone that arrived at her door, play crib, dance and loved to share stories of her childhood.

Condolences to Margaret’s family may be emailed to meaningful@telus.net. Arrangements in care of Meaningful Memorials Funeral Service, serving Red Deer and all of central Alberta, 587-876-4944.

Share Your Memory of
Margaret
Upload Your Memory View All Memories
Be the first to upload a memory!