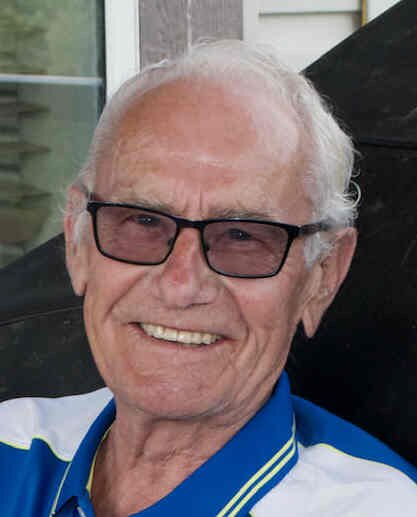 Harvey P. Warkentin passed away after a life well-lived, on August 12th, 2022 at Age Care Glenmore, Calgary, Alberta. Harvey was born in Sunnyslope, Alberta to Peter and Tina Warkentin. Growing up, Harvey helped out at the family store and with farm chores, such as milking the cows. He attended Lindsay Thurber Comprehensive High School in Red Deer, where he met his wife, Bernice.

They had four children (Dwayne, Reg, Holly, Dawn) and traveled with their growing family to Calgary, Fort St.John, Red Water, Edmonton, and settled in Red Deer where they raised their family. Harvey pursued Instrument technology as a vocation/career. During these years, Harvey started his career with various oil companies, working in the field doing well logging, testing, and repairing equipment. During the early years of his career he was employed by Halliburton, TG Eastland Testers, Energy Resource Conservation Board and Dowel Schlumberger. One of the defining moments in Harvey’s life was when he accepted a job with Dowel Schlumberger giving him the opportunity to live and work in Libya.

Bernice and the kids followed; spending a year in Tripoli while Harvey worked in the Sahara Desert. The family has many fond memories of that adventurous year. Harvey took advantage of this time by exploring the middle east with his family and coming home to Canada via Europe by plane, train, and passenger ship. Upon returning to Red Deer, Harvey began building his own successful company, Harvie Instruments Ltd. Harvey was a risk taker in business whose actions taught the value of a hard day’s work. Harvey loved adventure and made time to play hard as well! He loved to vacation and travel. With his various RV’s, he took his family on trips to BC, Oregon, California and Washington. Later, he and Bernice continued to explore North America in their motorhome, often with their friends from Red Deer, while also making new friends along the way! During this time, Harvey and Bernice invested in a timeshare condo on Maui so they could escape the chilly winters. This was another defining moment as they returned to Hawaii repeatedly for numerous years.

Harvey and Bernice loved family get-togethers at their house where they created many happy memories with their children, grandchildren, and great-grandchildren. Harvey will be remembered for his loving devotion and kindness displayed to his friends in need and especially to his family. He encouraged independence and self-sufficiency, but always with a generous amount of love and support. Harvey will also be remembered for the loving affection he showed toward Bernice during her later years when she had dementia.

Harvey is survived by his sons, Dwayne (Michelle) Warkentin, Reg Warkentin, his daughters, Holly (Steve) Speer, Dawn Warkentin (James Sutherland). He also has loving grandchildren - Sheldon (Janine), Megan (Dan), Brock (Danielle); Reggie, Emily (Ryan), Lisa; Nicole, Madison, Austin, Oliver, Samantha. Harvey is survived by 12 great-grandchildren and his close friend, Donna Clark. Harvey lived life to the fullest and was always open to new learning! He will be missed by all who knew him.

Harvey was predeceased by his wife, Bernice (Gibbon) in October, 2021 as well as his sister, June (Sheppard), and brother, Ken Warkentin.

Condolences to Harvey’s family may be emailed to meaningful@telus.net. Please indicate “Warkentin” in the subject line.

Share Your Memory of
Harvey
Upload Your Memory View All Memories
Be the first to upload a memory!
Share A Memory